Dining Cars provided seated meals (Breakfast, Lunch and Dinner) on selected sectors on our trunk Mail Trains from around 1930 to 1970. Railway Refreshment Rooms (RRR) at various stations would provide light meals in the form of sandwiches, pies, drinks etc. Some at larger locations provided sit down meals for sectors not covered by the dining cars.

Passengers requiring a cup of tea and a pie need to wait for these stations as well. Plus, many of these RRR had bars attached. In 1969 I worked Homestead (Mt Isa line, 73 Km’s west of Charter Towers) which had a RRR, the manager lived on site with her quarters included. It was privately run and I know a cup of tea and a pie was not on the menu. When I arrived soft drinks were added to the menu. Mixed trains heading west, about one a day would stop for refreshments. It was more a the local watering hole, most night around 10 o’clock you would be picking up the locals that went base over apex over the signal wires. Most were not in a condition to be able to return to their feet without assistance.

RRR managers a couple of hours before the due arrival of a train required train information, expected time of arrival and the train CANA. CANA was in the telegraph code was for number of passengers on the train. Hot drinks were served in china cups, the passenger would pay a deposit and be given a ticket which allowed the passenger to take the cup onto the train. At the next RRR the passenger could return the cup with the ticket and receive a refund. If a train was running late, the time at the station was reduced.

As I read notes/books from various historians the operation of dining cars varies a bit about where they was added to or taken off trains, may be different periods with different timetables. Looking at the Western Mail (Train 8S) in the 1939 Main Line Timetable, the train departing Brisbane Central at 3:15 pm. Toowoomba 7:20/40 pm as the dinner stop in the RRR and refreshment, Dalby 9:25/35, Chinchilla 11:15/30, Miles 12:32/42 am, Roma 4:02/17. Mitchell 6:36/56 attach Dining Car, Charleville 12:18 pm. Breakfast and an early Lunch were the meals provided. The train continued to Cunnamulla on Saturday only. On the return train 13 down Western Mail departed Charleville at 3:02 pm, Mitchell 8:21/41pm, refreshment and detach dining car. Roma 11:04/14 pm, Toowoomba 7:40/8:00 for breakfast in the RRR, arriving Brisbane 11:57 am. The 1948 timetable was much the same.

The 1958 timetable showed the Westlander being worked by a diesel electric locomotive leaving Brisbane a few hours later at 6:55 pm. Refreshments Toowoomba 11:01/25 pm, Dalby 1:17/25 am. Roma 6:59/7:35 change locomotives and attach dining car. Charleville 3:17/52.  The train was due to arrive at Cunnamulla 9:37 pm, this sector was worked with a PB15 engine with WW water wagon attached, a total of 10 vehicles. The train was at Wyandra 6:37/57 pm giving passenger plenty of time to duck over to the pub for something to eat and drink. The dining car providing breakfast, lunch and dinner on the Roma – Cunnamulla sector. In later years the dining car staff left the train in Charleville and stayed in quarter until the return of the train the next day. On the return the train left Charleville at 3:50 pm, Roma 11:30/58 pm, detached dining car and change locomotives. Toowoomba was the breakfast stop 7:40/8:05 pm, arriving in Brisbane at 12:00 midday.  Dining car staff also assist in the RRR prior to the arrival of the train.

1967 I was at Mackay working as a fireman for the sugar season, from time to time you would be rostered on the station shunt. Afternoon shift would take the dining car off the Sunlander and the night shift would attach it to the train with the PB15 shunt engine. I recall one morning the dining car was pulled from the shed without the shore power being disconnected.  We also worked the main line trains to St Lawrence, regularly I would be rostered 266 (southbound Sunlander) on duty 5:15 am to St Lawrence, arrive 9:42 am return 241 (north bound Sunlander) on duty 4:17 pm, arrive Mackay 8:06 pm, it was an awesome job, both of us would wear a white shirt for the day. It would set you up for a day job the next day, generally a 12 hour branch job. An added bonus was it was counted as two shift, after completing 10 shifts within the fortnight it was class as overtime. Other guys in the quarters indicated I was paying the roster clerk.

Dining cars at their depot station were hooked to shore power. A special siding with a shed was provided at one of the station near the RRR. Dining car provided a bit of work for the station/yard shunters. At some stage the dining cars were turned before there next trip. After each trip the food left over would be taken back to the RRR and likewise would need to be loaded up before the next trip. The kitchen end would be the best end to have on the stop blocks for loading and unloading. At Roma the dining car siding was on the western end of the station. I’m having trouble recalling if the kitchen was the leading end of the carriage, I was always on the train, and I can only assume what happened before the arrival of the Westlander. The dining car was attached to the train between cars 3 and 5. Cars 1, 2 and 3 were first class carriages and cars 5, 6, 7 and 8 were second class carriages. The dining car was car 4.To reduce the number of moves with the leading portion of the train still containing passenger the shunt engine would push the dining car out onto the leading part of the train with train brakes applied.

The following moves would be required.
Prior to the arrival of the Westlander, the shunt engine would pick up the dining car from the siding.
One of two things would be required, turn the dining car on the angle or run around the dining car. Running around vehicle is going to the other end, in this case the dining is on the Brisbane eastern end of the shunt engine coming out of the siding and needs to be on the western end.
Wait the arrival of the train in a siding with access to the main line.
With the Westlander stopped on the platform with the guards van on the platform, the incoming DEL would come off the train to go the shed.
Two C17 locomotives attached would be shunted to the lead of the train. During these moves, passengers would be leaving the train heading for the refreshment rooms for a cuppa and something for breakfast if you were not going to the dining car after departing.
The train’s power car attendants would disconnect the power cables supplying A/C power to the train between cars 3 and 5. The shunter would uncouple the leading section of the train, the train engine would pull ahead clear of the loop points,
Shunt engine would push the dining car onto the leading section of the train and return to the siding.
The lead section of the train would push back on the carriages on the platform, couple up and hook up A/C power supply. A train safety test would follow before departure. 37 minutes was allocated for the work.

The plan book does not show many Dining Cars, prior to the arrival of the Sunshine Cars, most appear to be conversions from other carriages. All up three Sunshine Express Dining Car were built, two (1255/1256) were built with first batch of cars and a third (1376) with the second series. Carriage 1376 was similar to other two carriages except windows in the kitchen end of the carriage. Car 1255 is in the current heritage fleet, Car 1256 became part of a Cooroy Restaurant in the butter factory siding and car 1376 was converted to a CW 74 camp wagon in April 1965.

In 1970, cars 1255 and 1256 were converted to Griddle Car. The kitchen area was extended to make a servery, gas bottles were added reducing seating from 30 to 22. These wooden cars were used on special trains that ran and second division of mail trains running during holiday periods.

My model is a carriage from the first batch and is a 3 foot 6 model kit. During construction the only photos I had was of 1255 as a Griddle Car. Some features of the carriage were questionable as a dining car. As per Norn, when finished you find the answers you were looking for, I located a John Armstrong photo of the carriage 1256 in 1964. My educated guess turned out to be correct.

The carriage body was painted with PGC “QR Passenger RED” lacquer paint. The dining area was scratch build for styrene, very simple construction as only the top of the tables are visible. Seating was much the same, just blocks with backs made of styrene. The figures were given to me by Ken, an eBay purchase for a few dollars. I think the scale could be 1:100. The pack contained about 100 figures, with many repeats and not much detail. That would be OK given they were inside a carriage. The figures were hand painted with Model Colors. I find a drop of paint goes a long way and dries within a few minutes. The two cooks in the kitchen and the two waitress were Preiser figures.

From time to time some carriages had white wall types on the wheels, I don’t think it lasted all that long, one of the Griddle Car photos shows the carriage with them. To give the carriage a smart look I added them with the view if I don’t like it I can repaint them black.

From above you can see that you can have some operations with your mail trains by having a dining car on your layout. I’m using the dock platform as the dining car siding during the running of my second 13 down, in other words “second division of the Westlander”. 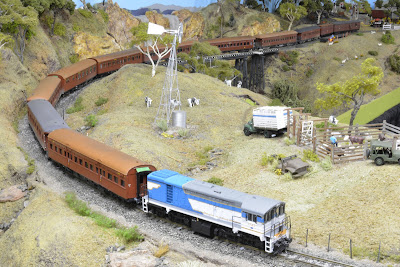 The 1970 Supplement to Working Time Tables shows a 1720 locomotive can haul 510 tons on a passenger train consisting of ordinary carriages from Charleville to Brisbane. The maximum of vehicles must not exceed 15. The same locomotive can haul 370 tons between Murphy’s Creek and Toowoomba in the UP direction heading west, that about 12 carriages.

In the 1960’s second division of the mail trains run at Christmas, Easter and start and finish of school holidays. Roads around the state were not that good, many were just corrugated dirt roads that wrecked your car. Train was the way to travel, on holidays, kids to boarding school etc.

AHRS Sunshine Express shows the following second division passenger trains in the mid 1970’s. I think this may have been close to the end of such services. By this time, most western roads had bitumen surfaces, altered trains service and with diesel electric locomotives, extra carriages could be added into time tabled trains. The standard Westlander was 11 vehicles, during holiday time’s 14 vehicles was common. After 1970 with the introduction of the “Capricorian” service, the Sunshine Express cars were not required for any regular time table long distance passenger trains. QLX wagons (Red diamond vehicles at the time allowed on passenger trains) were used as baggage cars and had to be marshalled behind the loco. Wooden carriages conveying passengers were not to be marshalled between steel vehicles.
2ND WESTLANDER 15th January 1975. DEL 1525, FBS 1245, AAS 1318, JCS 1175, FBS 1320, BL 1336/1246, MV 1059.

Looking at the timetable, timing at Refreshments Rooms stops, staffing and the number of dining cars in service, plus the information in the Sunshine Express, I think have a dining car on train 2nd 13 would of been luxurious and most likely did not happen in real life. Management on the SWR looks after their passengers and goes the extra mile for their comfort, thus a dining car on my 2nd 13 down.

The train can be viewed running on the layout on YouTube
https://www.youtube.com/watch?v=4VAPDH29-eo

Trust the information was useful for your modelling.