If you been modelling for some time you will most likely recall the good old days when rollingstock came with plastic wheelsets and your wagons didn’t roll all that well. Metal wheels mounted in delrin/acetal plastic side frames came along and improved things dramatically including highlighting where your layout was not level. It didn’t take long before most modellers changed out their plastic wheels for metal.

Modelling a 12 mm system, any wheelset was worth a pot gold and one took every opportunity to purchase them when they became available for future projects. After exchanging all my plastic wheelsets for metal, plus what I had for future projects and what I had been given, left me with a box of wheels no longer required. From time to time I would look at the box and ask myself “what are you going to do with them”. I know what Kerrie would say, “toss them” and few other kind words. The box would go back on the shelf until next time I was looking for something.

Some time back I added a wagon maintenance depot to the layout, to set the scene this gave me an opportunity to use a few on the wheelset.

This is the back side of the scene, the detail of the workers etc. are out of view in this photo.

Recently I was researching a project and looking through various photos when the penny dropped what I could do with the plastic wheelsets. With the introduction of a wheel lathe at Redbank Workshops, the life of wheelset could be extended. This called for special wagons to carry wheels between workshops and maintenance depots. Over the years that followed lathes were installed in other workshops which lead to wagons being allocated to carry wheels around in their division. Over time older wagons were replaced with newer wagons, drawhook wagons were replaced with auto coupler wagons, all were converted from wagons no longer require for the purpose they were built for.

The first wagons to be converted for this traffic were FJS, 4 wheeled open wagon to FJW and HS 8 wheeled open wagon to HSW. Plan P 94 gives a bit of information on the FJW wagons. Tare 5 T 9 Cwt and carry 11 T 11 Cwt. The wagon could carry 13 wheelsets with 33½” wheels, 9 on the floor and 4 on top. Wooden blocks were required for smaller wheelsets. The first FJW entered service in 1970 and the first FJWT (auto couplings) in 1971. I guess the FJWT were for the coal areas as most wagons had auto couples without buffers.

I cannot find much information on the HSW wagons. They were converted from HS wagons with a carrying capacity of 22 tons. The wagons had hook drawgear and were goods wagons restricted to 35 MPH or 60 KM/h. The HS class was unpopular with traffic staff due to the single door on each end. This limited there use as everything had to be man handled into the centre of the wagon or be lifted over the fixed sides. Shunters did not like the bogie, it was located right on the end of the wagon and had a guard around the leading end just a few inches above the rail. It was very easy to catch your feet under the guard, which earnt them the nick name as “toecutters”. Looking at the history of the wagon they entered service with a hopper type floor to discharge coke and concentrates for Mt Isa mines as the HVS class. The hoppers floors were replaced with a standard flat steel floor in the mid to late 1950’s and reclasses HS class. The guard may have acted as a plough to clear obstructions in front of the wheel to reduce the chance of derailments. The HSW lasted until the 1990’s. Some photos around this time show cover wagons on each end as the green light had been given to remover buffer of most wagons fitted with auto couplings. HSW would have been an interesting model to make with their fish belly underframes and outside brake gear. What put me off was their uneek bogie, I guess I could have used something similar, the object of the excise was to use up what I had in the draw.

As I often put loads in wagons, I find the information on the carrying capacity of the FJW interesting. 13 wheelsets on a wagon that can carry 11½ tons, that makes a wheelset just under a ton, or around 18 Cwt an axle. I understood cast bogies were around 4 tons with the wheelsets being about 1 ton each. I had an H wagon looking for a load, the wagon didn’t have inside detail. I would think wheelsets were moved around the network before the introduction of the wheel wagons. An “H” wagon would be suitable for the job. H wagons can carry 12 tons plus an allowable 1½ ton overload, 13 wheelsets as above would give a full load within the carrying capacity. The wheelset would have been chocked with old sleepers making the loading process a bit messy and time consuming, with extra wheelsets moving over the network as a result of the lathes would be a good reason for a special wagon.  The “H” wagon would better suit my era. The black plastic wheelset were given a coat of burnt umber to give a more realistic used look.

Around 1980, BSW wagons fitted with automatic and transition couplings started entering service. These wagons were red circle vehicles allowing them to travel at 80 km/h on express freight services. These wagons were converted from BLC box wagons. The plans show some wagons were built to carry 18 wheelsets with 915 mm diameter wheels and others to carry 19 wheelset with 850 mm diameter wheels. Early wagon for 850mm wheels converted retained their original number (31035, 31105), wagons converted in 1988 for 915mm wheels were allocated new numbers (36293, 36299, and 36300). All up eight wagons were converted over a number of years, the last be done in 1994.  Carrying capacity of the wagons were just 22 tons. The wagons remained in service until 2013.

1991 the WHW wagons were introduced to the traffic converted from WHE grain wagons. Between 1991 and 1994, 11 wagons entered service. Two were scrapped in 2013. All retained their original numbers. In later years, the loading configuration was alerted on the wagons working out of Redbank. Wheelset were loaded across the wagon, I guess this was to allowing loading/unloading using forklifts. 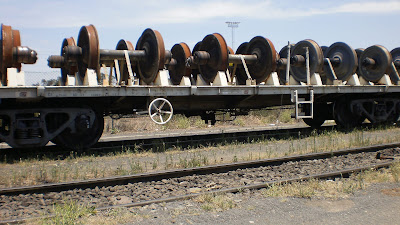 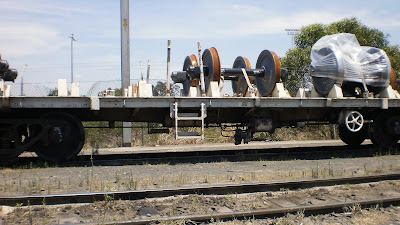 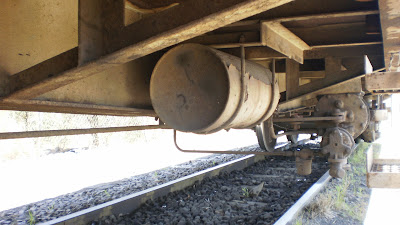 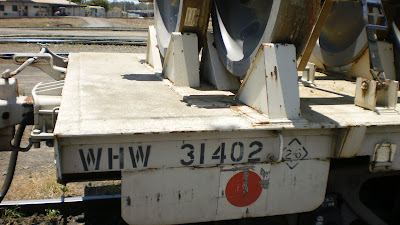 There were other wagons for wheelset/bogies including the PW for electric loco bogies, 6 were converted and one WHED class to carry bogies frames without wheels.  All were converted from WHE wagons.

To put my box of wheels to good use and to use other bits (bogies) in the cupboard, WHW wagons were built. The wagon were scratch built from styrene similar to other platform wagons on the layout. The plastic wheels are black and would not look right if placed on a wagon. 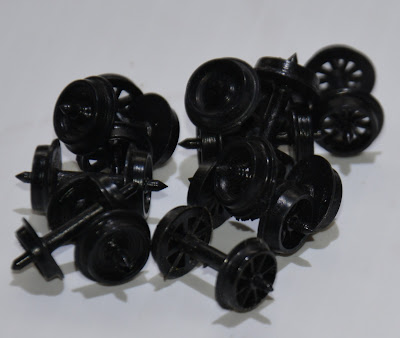 The wheelset were sprayed with a grey etch primer. The tyres were hand painted with “Model Color” gunmetal. Some weathering was added using earth colours and rust. Wheelsets are secured with web straps on the prototype, my straps are cut from a yellow plastic shopping bag, the bag was cut into 1 mm strips, and the strips were glued into place over the axles with super glue.  I use wheelsets of a different size and a mix of disc and spoked for most of my loads. Looking at later periods and certain areas, wheels going and coming from the coal fields etc., the wheelsets would all be the same type and diameter.

Buffers were added to the models, plans for the wagon show buffers fitted. I would think given the period that WHW wagons entered service these wagon may of entered service without buffers.

I still have quite a few wheelsets in the box, HSW may find their way to the layout down the track.

Trust the article has inspired you to do something “out of the box” for your railway.