6 Up was the Toowoomba to Roma passenger train, returning to Toowoomba the following day as 19 Down. Both trains connected with the Sydney Mail (26 Up and 37 Down) at Toowoomba providing a service from and to Brisbane. The service also provide a daylight service between Brisbane to Roma in lieu to the overnight Westlander service. 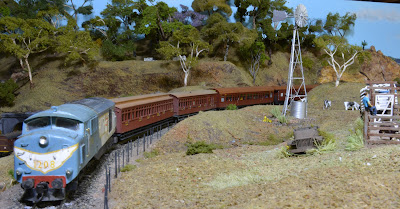 As a kid, mum had family in the Dalby area and we travelled on the train during our holidays. Not sure when the train started running, but it was shown on the 1939 Working Time Table with other trains doing much the same thing on other days of the week. In the early 1960’s the train departed Toowoomba on Mondays, Wednesday and Fridays.

In 1964 the Time Table was as follows.
26 Up, the Sydney Mail from Brisbane was due in Toowoomba at 12:18 PM, the  Working Time Table (WTT) show the train being worked by a diesel electric locomotive (DEL). The regular workings for a DEL at the time was Brisbane to Toowoomba on 26, Toowoomba to Brisbane on 37, and later that night the loco was working 241 Sunlander to Cairns.
6 Up departed at 12:45. The leading two carriages on 26 were transferred to 6 UP. The loco working the train in from Brisbane would take the two cars off the lead of the train and place them on the rear of 6 Up loco waiting in the loop. At the time 6 Up loco was a BB18¼ loco, 6 Up loco would run out towards the west and set back onto the train in the dock. On Monday the train would convey a compo van next to the mail van to go through from Roma to Charleville on 106. A KCS compo sleeping car was also attached to 6 Up for Charleville. I have a feeling a baggage car also went through to Charleville. This makes an interesting marshalling for the passenger train.
Toowoomba depart 12:45.
Oakey 1:32/33
Dalby 2:46/56  water, refreshments
Chinchilla 4:38/48 refreshments. Crew change
Miles 5:27/45 water, refreshments
Yuleba 7:54 / 8:00 water
Roma arrive 9:26.

The WTT showed the train stopping at the 239 miles 51 chains to set down school children, Miles was 230 miles 76 chains.

All up the distance travelled was 217 miles, at the time this was the longest main line steam hauled passenger service in Australia. After the introduction of the “Westlander” the service was referred to as the “Western Mail”
.

DEL’s were observed working the train on long weekends and when it was necessary to transfer Roma based 60 T locomotives for servicing/repairs etc.
I recall returning home from Brisbane, we were in the KCS sleeping car on 106 Mixed Train when the C17 broke down in the section near Sommariva. I felt the engine was sick from the start leaving Roma. Dad, mum and us three kids found a hole in the rabbit fence and hitched hike a ride home. We were home for some time when a C 17 light engine running tender first left town to rescuer the train.

On Saturday at Roma a compo sleeping car (KCS) and van off train 567 from Charleville was attached to 19 Down. The WTT indicated the train will pick up cream for Oakey and Toowoomba.

In 1965 I recall travelling from Charleville to Brisbane to receive my Queen Scout Award from the Governor. We left Charleville on 567 Mixed Train for Roma in the KCS sleeping car, at Roma the KCS and the CLV van on the rear of 567 was shunted across onto the lead of 19 Down consist in the dock platform. I recall how disappointed I was when a green engine backed onto the train. Only, if we could turn the clock back ????

Last steam hauled train was 6th January 1967 returning 7th January 1967 worked by BB 18¼ locomotive, both trains were on time. With allocation of 1720 locomotive to the SWD around this time, I could not think of a better locomotive for the job.

The 1967 WTT show the train 6 Up being worked with a DEL and only a compo van for Charleville. The train departed Toowoomba at 12:30 and arrived in Roma at 8:24 PM

The timetable showed the train 19 Down being worked with a DEL and only a compo van from Charleville. Roma depart 5:10 am arriving Toowoomba 12:45 PM.

At 6:14 am on Saturday the 1st of December 1956, locomotive DEL 1200 working 8S the Westlander (345 tons) with 150 passenger on board run head on into locomotive BB 18¼ 1043 standing at the platform on 19 Down (200 tons). The force of the impact pushed 19 down back 46 metres. John Kerr notes (1957) shows one of the Westlander locomotive buffers was hurled over the station roof, and 150 yards along the road. Five passengers were killed, 18 injured, 10 were admitted to hospital with one being conveyed by ambulance to Toowoomba. Most of the injured were on 19 down.

The Connor estimated speed of the Westlander was 32/40 Km/h. Board of Inquiry found the Westlander had passed the Home signal at Stop and were satisfied the something abnormal occurred in the cab of DEL 1200 just prior to arriving at Wallumbilla.    A short video clip on the internet shows end veranda Sydney mail and Sunshine Express cars on the train.

A monument commemorates those who lost their lives when the "Westlander" and the "Western Mail" collided in 1956 was erected in 2005 and officially unveiled on the 9th December 2006. Photos of the incident can be viewed in the railway station which forms part of the Tourist Information Centre at Wallumbilla.

When working DEL’s, the ride is very comfortable and with less energy required, it not hard to drop off for a snooze. Crews working trains being asleep was becoming a big issue. The above incidents at Wallumbilla was the catalysis for QR to develop the Vigilance Control System or VCS. My Cleaner’s Handbook (1965) shows there was three systems, Westinghouse RB, Westinghouse AA and QGR Engine crew alerting system. The systems cycled around at 2 minutes intervals, 90 seconds and 30 seconds to acknowledge. The QRG system was electrically operated on a 15 second acknowledge, the system had an automatic acknowledgement by the driver moving the throttle or the brake value.

At first it was the Fireman’s job to acknowledge, first he was to see if the Driver was awake before pushing the button. Later this was transferred to the Driver. Failure to acknowledge the alarm applied the train brakes. Permission was required from Control to cut the system out in the event of a system failure. The system commence being fitted to locomotives in 1963. Later again, the system was connected to Station Protection System with much short acknowledgement times. Generally, the crew would press the VCS button round every 60 seconds to start a fresh cycle, this would save the alarm hooter from going off in the cab.

Often this train was worked by a 3 car 2000 RM, one car being used for parcels traffic. At Toowoomba many for the parcels/mails were loaded through the windows and placed on the seats.

November 1981 WTT shows a new number, 5616 and returning as 5665 on a later run leaving Roma at 7:45 am and arriving in Brisbane at 6:00 PM.. Refreshments were still available at Toowoomba and Dalby.

I recall travelling on this service, I was required to open the display wagons at Roma and Charleville, new freight rates were not being received all that well in the west, there were a few meeting to get feedback and for QR to interact with the locals. To save sitting on the back end of a goods train and added waiting time in Toowoomba, I went to Roma on the railcar. The distance between Chinchilla and Miles is 30 miles, the railcar did the trip in under 30 minutes slowing down to cross the Warrego Highway twice. The WTT gave 49 minutes to run the section, we have plenty of time at Miles to duck over the road to wet the whistle and to have something to eat. 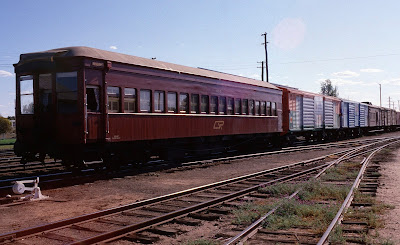 Bob Wilson, author of Friday Afternoon Photos, a railway historian from Victoria travelled on the train in October 1984, the railcar had been replaced by an eight (8) car train worked by DEL 1408 due to a number of school excisions .

February 1990 WTT shows 5R16 running Monday, Wednesday and Friday, departing Toowoomba at 1:00 PM and arriving Roma at 7:23 PM. Returning 5665 Tuesday and Thursday leaving Roma 8:00 am arriving Toowoomba 2:18 PM. I guess that begs the question “What happens to the Friday Railcar to Roma”, no return shown.

Currently I have the Saturday 19 down (Roma to Toowoomba) on the layout worked by DEL 1208.

This loco is a Far North Hobbies kit and power by a Hollywood Foundry flexible (rubber band) drive mechanism. I purchased the locomotive from Bob Harding when he was changing eras.

These two leading vehicles came off the rear of Train 567 (Charleville to Roma) over night mixed train.

Cars 5 & 6. DAS 1st class sleeping cars being used as 1st class seating cars (40 seating passengers). These two carriages were scratch build in 1974 and will be retired later this year. They will and make their way to the Westgate museum. The cars are being replaced by Caintode Flats Kits. 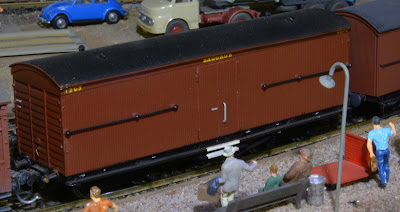 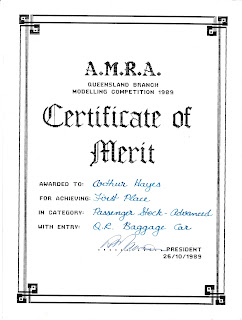 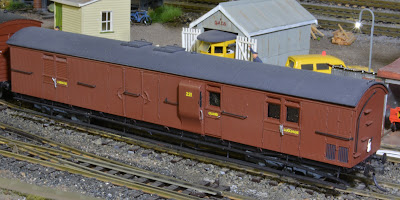 The train can be viewed in operations on the layout crossing a west bund goods. https://www.youtube.com/watch?v=OCDoUKTWN0M