“P” Wagons were listed in the original wagon classification code introduced in 1890 as an 8 wheeled platform wagons. Other railway owner/operators may call this type of wagon a flat car or flat trucks. The term “Flats” was used in Queensland shunting yards, but it referred to open wagons (F, FF, FJ, FJS, FG, H, HJ, HJS class wagons). Yard Orders for Monday afternoon could say hold 10 F of Flats for wool and place on ramp for 7 AM loading Tuesday. It was up to the Shunter in Charge to select the wagons from empties on hand. One “F” was the length of the smallest wagon in traffic, a 4 wheeled “F” wagon which was 15 foot long. An “H” wagon (30’) was 2 F, thus the Shunter in Charge could place 5 H wagons or 8 FJS to fill orders. 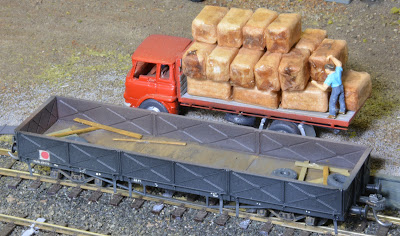 PTH Ipswich Workshop 1979.
In the mid 1950 the methods of transporting goods was changing, wheat/sugar started to move away from bags to bulk handling. Many W/MTW wagons in the wheat traffic found work in the seasonal sugar traffic (July – December), this also made a number of wagons available to general traffic. The longer, steel frame MTW wagons providing a number of advantages over the timber frame P wagon. By 1960 the “P” wagons were not big in numbers, but where was quite a mix with some having special use, below is some info from the 1960 annual report.
Reading a list of derailments for 1950, a number of PT/PTH/PWT derailments were recorded across the state.
In 1969 most wooden Jumbo (J class) wagons (8 ton axel load with 8 x 4 journals) on the QR network were reclassed and had their carrying capacity down rated to carry 12 tons, PJ wagons became PH wagons. .

With the introduction of bigger steel wagons in the mid 60’s (QFX), not many wooden “P” wagons made it past the end of steam
The 1982 Rollingstock Book showed 3 PH wagons in traffic.

PH Yeerongpilly 1979
P wagons carried various types of loads, mainly wheeled vehicles, machinery, plant and were used as runner (match/cover) wagons for long loads hanging off other wagons.
Peter Kennedy who was Manager of Special Loads for many years and was on the QR Rollingstock committee add some information on PJC wagons.  Probably in the mid-sixties a new type of galv iron roofing came on the market under the trade name of ‘’klipklock’’in long strips and initially were conveyed on 32’ P type or 40’ MTW wagons., Gradually the lengths of this strip roofing increased and we found 50ft lengths could be carried on 40ft. MTW wagons by extending 5ft beyond each end of the wagon and using a runner wagon each end for which the customer paid an extra 2 tons freight for each runner wagon. Obviously the customer didn't like paying for otherwise empty runner wagons, also we dislikes using 3 wagons for little payload. I found out older timber carriages on 50 ft. steel underframes were being scrapped and we saw an answer. Several 50ft carriages steel underframes were timber decked as flat wagons and used for 50 ft. roofing and classified as PJC wagons. As these underframes were rather weak they were restricted to 10ton capacity.  Soon however we were asked to carry 60 ft. lengths of roofing and again we used two runner wagons and a PJC. It should be noted that 5ft was the max. length of unsupported roofing extending beyond the end of the wagon before the risk of buckling may occur.  Again we were asked to take longer lengths. To achieve this we made up several ‘’outriggers” were made from 60lbs rails bolted to the ends of QFC wagons and projecting a further 5ft beyond each end so that the overall length of the wagon was 60 ft. and allowing for 5ft. unsupported overhang each we could carry ‘’Kliplock’’ roofing up to 70ft max length again using a runner each end. Because of the increased mass of the roofing as it got longer we needed to use QFC wagons as the mass of the roofing exceeded the 10ton load limit on PJC wagons. Reference to para 14.1 of the ‘’loading booklet’’ will explain more. When not needed the ‘’outriggers’’ were removed from the QFC wagons allowing them to return to normal use. The PJC wagons were also seen as a suitable light weight low capacity wagons suitable for motorcars and were fitted with car restraining bars and reclassified MPJC. Later more 50 ft. carriage steel underframes were modified for car traffic and classed ML.
On Westgate, I have a number of “P” wagons.
Wagon 1. “P” wagon with rain water tank. The wagon was scratch build using Evergreen styrene, Caintode Flats bogies with Kadee whisker 158 coupling. The coupler box were built into the floor during construction. I was given the CGI tank, it is 10’ 6” wide and looked too big to go beside a house. Wide “Out of Gauge” tanks were regularly consigned from Beaudesert. Saw mill offcuts were place over the bottom rim of the tank and nailed to the wagon floor clear of the tank. Rope (cotton) was placed over the top to add extra securing. The FJS wagon following has also been loaded with smaller tanks on their sides.

Wagon 2. “PH” Wagon with 2 Tractor was built in the same manner at the P wagon above. The tractors were picked up at a buy & sell, and repainted. One was fitted with a blade on the front, a canopy for the operator and a slasher on the back, all items were knocked up from styrene. The tractors were secured with sleepers and chain.

The next four wagons have just entered service on the layout.
Wagon 3. “PJ” wagon with a Massey Ferguson MF 830 Combine Header. The wagon was build as above from styrene and Caintode Flats bogies.
The Massey Ferguson Combine is an Artitec kit. The kit consisted of some 40 parts, including approx. 25 etch brass parts plus 10 decals. www.artitec.nl 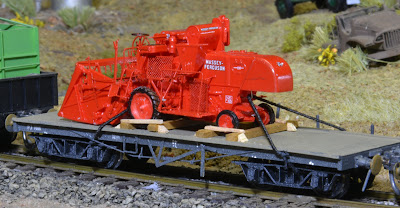 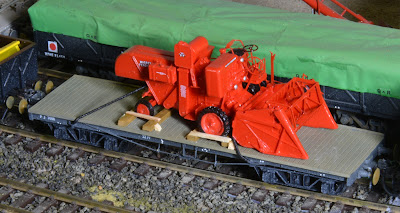 Wagons 4, 5 and 6. These three wagons are 26’ wagons, built in the same manner as the other wagons. They are being used as runner (Cover/match trucks) for long over length loads on other wagons. 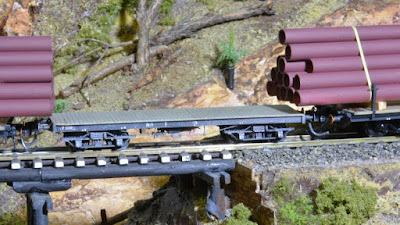 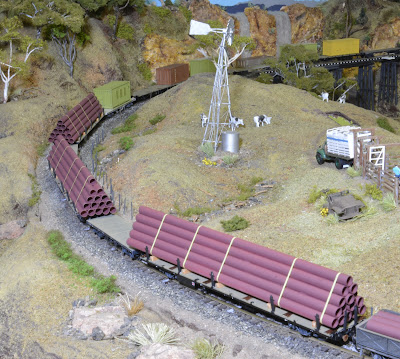 Longer pipes can be carried on the prototype using this method of loading, on the layout with tighter curves they would be very much an issue.

I used scraps to make the floor on the 26’ “P” wagons, dunnage from a previous load was used to cover the join visible in the floor. .
All the “P” wagons have been marshalled into a train for their first run on the layout.
https://www.youtube.com/watch?v=OCDoUKTWN0M
In the early 70’s the “P” classification took on a new meaning. At the start most were cut down steel wagons to carry one ISO container, then 2 containers. As always there were a few exceptions along the way. I cover this in a later post.
Enjoy.
Arthur H.
Posted by westgate swr at 23:28