Back in December I reported on breakdown vans and wagons that were added to the layout. What I had built was what you would expect to find at a district locations like Roma, Warwick, Maryborough and similar stations around the state, locations where you would find a District Superintendent (DS) in charge. Divisional breakdown trains included a crane, these were located at Brisbane (SED), Toowoomba (SWD), Rockhampton (CD) and Townsville (ND).

If a larger derailment occurred some distance from these locations, to reinstate services, rollingstock was just pulled to the side of the track, track repaired and trains started running again. Once things had settled down, a special recovery train with the divisional crane would make run and clean up the site and convey damage wagons back to the workshops. From time to time the cranes were used at district locations to assist with repairs and to pick up odd wagons left behind from smaller derailments. I also recall them being used to replace bridge girders.

During Covid - 19 lockdown I was able to reduce the number of kits in the cupboard and completed a string of models, this left me short of detailing parts. Obtaining these parts is just about impossible in our local hobby shops. On most visits to hobby shops I would return home with just a couple of items on my shopping list. I found doing an on-line order with the manufacture has good results. Very few years I do an order for some of these parts with Tichy Train Group in the US. I have found them good to deal with, you place the order, they come back with postage cost and the complete order arrives within a few weeks without the need to leave home. I plan out what I need for future projects and carry a few spares items I use regularly, it helps to cut down the postage cost per pack.

My last order came with a catalogue enclosed, it was much larger than my order. On the first page was their 120 ton Industrial Brownhoist steam wrecking crane.

QR had a 15 ton steam crane, I recall seeing it working around the back of the Ipswich Workshops in the late 1960’s pulling condemned wagons apart. There was always going to be a difference between the two given the size differences. Digging out a photo I had taken of the crane working at Ipswich I found the jib and the mechanism were somewhat similar.

Sizing up the Tichy Brownhoist crane using the bogies, as a known size. The overall size of the jib and mechanism looked as a possible kit bashed project. Passing the catalogue around it didn’t take long before a mate indicated he was going to order for some parts. The crane was added to his order, a few weeks later the kit arrived containing some 200 parts for $ 50.00. If the kit was unsuitable for a QR crane, I could use it for the standard gauge network part of the layout. Often, many US companies offer discounts around special times of the year, Thanksgiving etc. It’s worth subscribing to their newsletters to know when they are offered. 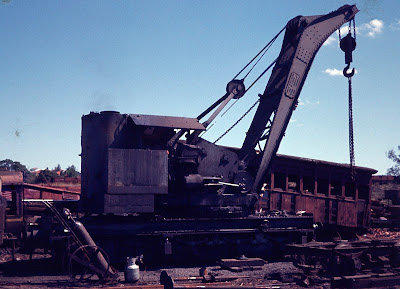 The photo didn’t show much detail for the wagon frame that carried the crane. After some research I was able to find a Keith McDonald side elevation drawing showing the bogie arrangements, a six and four wheeled bogie and some basic measurements. The drawing didn’t have an end elevation diagram. With the information I was able to collect, I only had details for one side only.

Cutting the jib back to the second hook, it was close to the mark. The crane drive mechanism,

as expected was a little high and longer than the plan. I was able to reduce the height by fitting  a scratch built cab and bring it within the rollingstock gauge. The length I reduced where I could without chopping into the mechanism and accepted that it was a little longer than the plan. I feel capturing the main features makes it look the part.

A new cab was made from styrene using the above photo as a guide. The boiler in the kit was incorporated into the cab.

The wagon frame to carry the crane was scratch built from styrene. The frame was made similar to most other wagons I have built for the layout. Slaters checker plate sheet being used for the floor. Coupling draft boxes were built into the underframe floor to take Kadee # 158 couplings. The bogies appeared to be plate side frame arrangement, nothing commercial was available. The bogies were scratch built using 40 thou sheet styrene for strength. The side frame plates were drilled (2 mm) to take Steam Era derin bearings using a steel ruler to ensure all wheels would be level.  Small amount of side play was allowed in the centre axle when fitting the bearings. A jig was made to assemble the wheels into the side frames. Detail including the axle boxes and springs were added to complete the bogie. 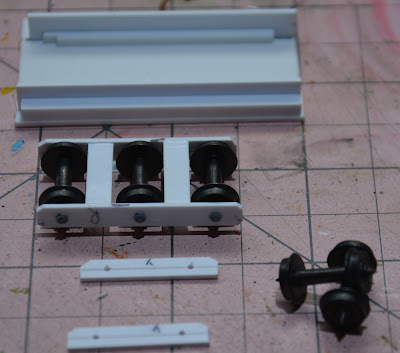 The leading end of the six (6) wheeled bogie was made the pivot to reduce the swing of the crane jib. On the layout the jib needs to stay within the profile of the match wagon. 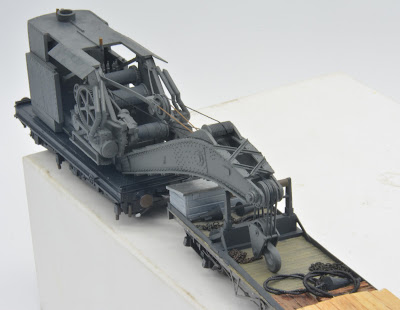 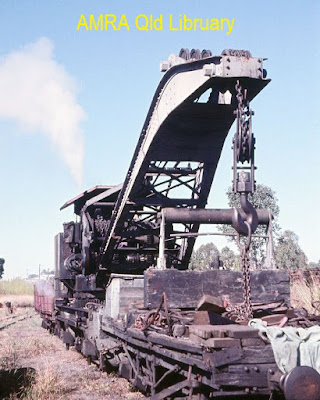 Edging was added around the sides and end, a jib support frame and tool box were made and some equipment was added to the floor, jacks, chains, cable and packing timbers to complete the wagon.

The crane is mounted to the wagon frame with locating pins. The jib was fixed to sit up clear of the support frame on the match wagon to reduce the chance of derailments. Likewise, the hook was fixed to clear the floor.

The prototype is stored in the ARHS Rosewood Museum. I was hoping to make a visit to the site and maybe take a few photos and learn more about the crane, wet weather, lockdowns, restrictions and more wet weather has placed the visit on hold for the time being. To find out more information about the crane I went to Mr Google. I found a site “Surviving Railway Cranes in Australia” which showed some interest information.

Number 431, built by Ransomes & Rapier (B7114) of Ipswich in the UK in1914. The site showed the 16 Ton Krupp-Ardelt were built in 1967.  This information highlights the steam crane was the only ”all lines” crane on the network until the arrival of the Krupp cranes. The 40 ton Cowan, Sheldon & Co cranes were built in 1961.

I like the look of the Krupp Cranes, there is still a couple of them around. One at the Rosewood Museum and the other is with Southern Downs Railway at Warwick. The rollingstock blue book has a small plan of the crane. I would still like to have one on the layout one day.

At the start I referred to recovery trains working through the division at times, I put on my thinking cap and made one up for the layout.

Not being a huge train, a 1500/1170 DEL was rostered for the job. The crane and match wagon was placed on the lead for the crew keep an eye on it during travel. 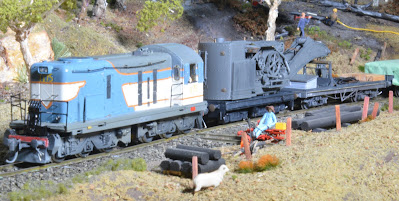 Behind the crane I added a open wagon covered with a tarp. This wagon carried material to keep the crane operational for the trip, lighting up wood, coal (may be wood was used to keep steam ??), lubricating oils and other items needed for the crane. The next group of wagons were platform and open wagons to convey the damage rollingstock recovered from the side of the track. An “F” has been recovered and placed on an “S” wagon. 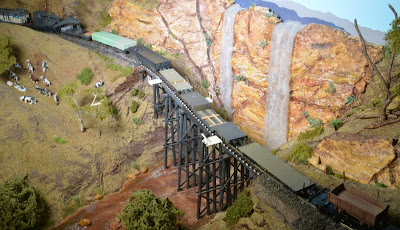 The next group of vehicles is accommodation for the workers, one camp wagon for the crane crew, the other camp wagon is for the breakdown gang. The Sunshine sleeper is for the Manager Special Loads, some damage wagons to be picked up will be outside the loading gauge and a “Authority to Travel” will be required to allow the wagons to travel. I did think about adding a water wagon, (1) additional water for the crane during the day and, (2) for drinking water for the workers in the camp wagons. The train would most likely spend nights at a depot station where tanks could be topped up each day before departing. Additional water for the crane could also be carried in a ship’s tank in the tarped wagon.

The last four wagons being the breakdown wagons with equipment to assist with the recovery. These were the wagons built in December.

Overall, something very different for the layout to reflect a unusual train not viewed all that often on the network. It has provided quite a bit of discussion with visitors to the layout.

To view the train running on the layout, hop over to my YouTube channel.