I only saw one of these quant 26’ cattle wagons, it was at the back of Ipswich Workshops. I guess it had completed its last run and was on the way to Wulkuraka for scrapping.

In researching the class I have been able to locate a number of photos of the wagons in service. John Armstrong book “Wooden Wagons of the Queensland Railways 1880 -1980” details a colourful history. Most started life as six wheeled “J” cattle wagons in 1882 and could carry 12 head of cattle. That was 12 months before the first bogie “K” class cattle wagon.  Both were built similar fitted with a roof and a single door. When fitted with 4 foot “AW” bar frame bogies around 1894 they became the KJ class.  Some were converted to NM sheep wagons for a couple of years in the Northern Division as drought relief.  Like the early “K” wagons some were fitted with double doors, some received half side doors for coke/sleepers traffic. Around 1948 the roof was removed and became an open goods wagon as the “YJ” class.  Again in 1951 the roof was restored to 11 wagons making them the “Y” class. 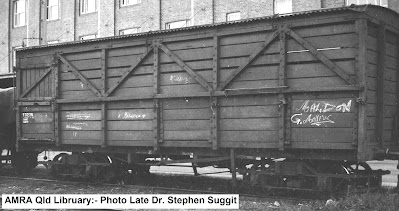 Loading/unloading these wagons must have been a nightmare in general goods traffic.This wagon is at Newstead with a wagon wool attached, hope it is empty.

1958 the roof was removed yet again and the wagons became a cattle wagon as the “YK” class. A small number lasted to about 1975. The back cover page of John’s book has a photo of the double door “YK” wagon. The book is available from the ARHS Qld on line book shop for $29.95. 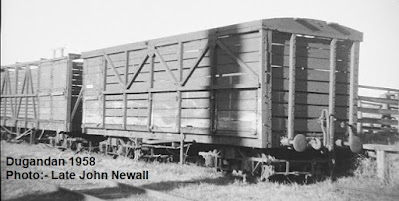 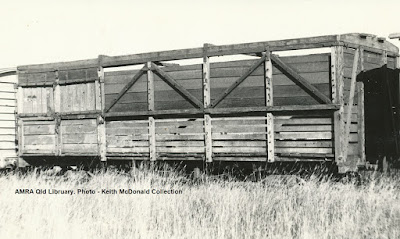 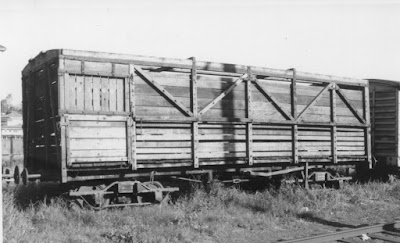 I was talking with another modeller who was a work colleague in the 1970’s, and he asked me “what are you doing”? I indicated that I was working on some YK wagons. He reply, didn’t see to many of them, but he indicated he was working at Fernvale in 1962 during the great Queensland drought. YK wagons were loaded with hay and covered with tarps.

Hay was normally loaded into open wagons (F, H class etc.). Once the load extended about the side the bales would be stacked like a pyramid coming in half a bale for each tier to a maximum high of 8 feet. Instructions states as the ingress of water can lead to overheating and spontaneous combustion, special care must be taken with the use of tarpaulins to ensure that they completely cover the consignment. Where more than one tarpaulin is required, the overlap must be sufficient so that the water cannot entre. Plus, during the steam era, the tarp would prevent live cinders landing in the load.

I build three wagons using Evergreen scribed and strip styrene. The sides and ends were formed up in a jig along the lines of a “K” wagon format. Bogies and buffers are Caintode Flats. All wagons were paint with PGC QGR Oxide. 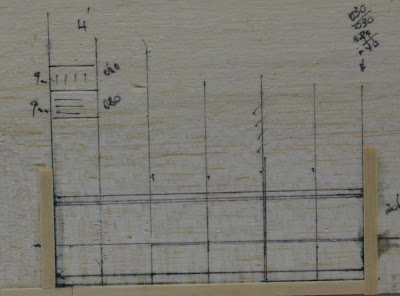 Jig made from balsa and bass wood. Vertical lines are drawn in with a Sharpie (a fine point felt pen) before attaching the outside trim. Sizes of material can also be recorded on the jig, it help us old farts. 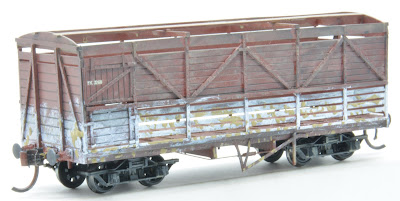 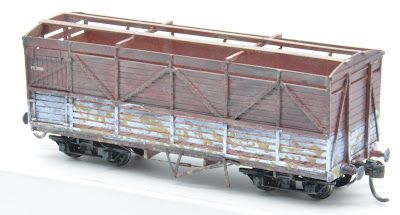 On this wagon the rivets were applied during construction (400 plus???) before painting. A mix of Archer and Micro-Mark, don’t look to close, they may not line up with a board???. I used a strip instead one by one. Weathering was a wash I made using Vallejo Model Color and Armoeall glass cleaner. The glass cleaner is ammonia free and was purchased from SuperCheap for about $ 12.00. All wagons were hand printed with Dullcote first, stroking along the timber sides with the grain. No set formula was used, a couple of spurts of cleaner with a drop of paint in a paint pallet. The first wash was applied by a small brush using Model Color # 70.862 Black Grey. You need to wait until the wash has dried to see if you want more. The white wash applied to the lower half of the sides and ends was Vallejo # 70.951 White. The 3D cattle poo was made using Vallejo Model Color Khaki # 70.988 paint mixed in with Vallejo plastic pulley. The mix was randomly applied to the lower half of the wagon with a tooth pick. To finish off the wagon, the rivets on the top half had Model Color # 70.941 Burnt Umber allied with a blunt pin. The point of the pin was stroked a couple of times with a file. A drop of paint was placed on a piece of scrap styrene, the pin was dipped into the paint and applied to the rivet. 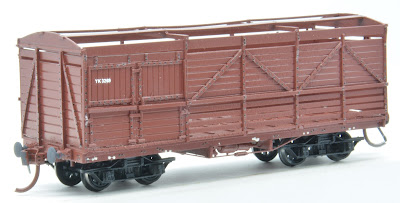 This double door wagon had the rivets applied after painting, the black rivets looks good but I don’t think it is prototypical XXXX. Weathering job coming up????

This wagon was built the same as the first, except I forgot the toe batons on the floor. Hearing the story of the hay at Fernvale, just had to have one. Scenic ground cover was applied to a strip of styrene and inserted inside on the lower half. The traps is a used tea bag cut to size.

The standard size of tarpaulins in 1962 are as follows, small (distinguished by letter “A” before the number) 20’ 5” by 14 ‘, Large 23’ 3” by 17’ (eight canvases) . As from April 1962, newly manufactured tarpaulins have the serial number prefixed by the year of manufacture and large trap became the standard size. 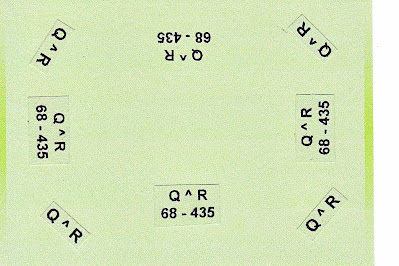 Normally, I paint the tarp after I have add it to the wagon. There are a couple of issues with this method, painting over the sides and it can pull the tea bag into the sides giving an unprototypical look, The trap covers the sides and you should not see the ribs in the side of the wagon. This time around, the tarps were painted before being added to the wagon. One painted Vallejo Model Color # 70.922 Uniform Green and the other older traps was painted Model Color # 70.881 Yellow/Green. The paint does soak through, be carefully your tarp doesn’t stick to the item under it. I’m quite happy with the results, the tea bag folded freely. The tarp numbers were added once the traps were in place. The trap rope (Ratline) is paint brush bristles cut to size and secured with super glue. The wagon was not weathered, going to Fernvale on the Brisbane Valley Line with train starting out of Ipswich North Yard, overhauled wagons coming from the workshops would be a good source to fill orders.

My wagons are built for operations, thus not much detail is added under the floor, only what is visible from the sides is added.  Coupler boxes are built into the floor with a reduced yoke, (a) to allow the coupler to fit between the wheels and (b) to reduce swing out when wagons are being pushed during shunting operations.  On the scales the wagons come in at 41 grams.

Overall, some new methods were tried with a good result.

Currently the wagons are on the layout and can be found on trains in the latest YouTube video.  https://www.youtube.com/watch?v=4A2IvsEY5YM

Happy New Year, we trust 2021 will be kind to you all, have fun with you modelling.