Railways of Queensland an album of .... Volume Two provided the inspiration for this model. Page 37 shows a Stan Moore photo of CV 286 at Gladstone on the 17th of April 1966. I could also recall these vans in service with their uneek windows across the end of the 2nd class compartment. 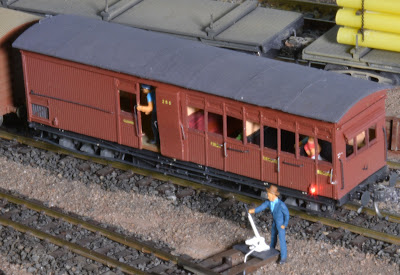 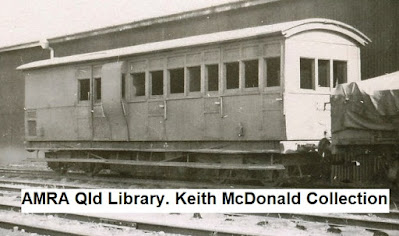 The van could be CV 243 Stan photo shows the van having an awning over the end windows similar to some Northern Division carriages and vans. It appears the bogies on the Woolloongabba van had been changed as well. Another photo shows CV 242 with three compartment doors with no end windows. This highlights four different vans can be made from the plan. The vans were built by Springall and Frost at Ipswich. List of Coaching rolling stock dated 1963 shows the following vans in service, CV 242, 243, 284, 286, 283, 285. CV 283 was a part of QR historical collection in 1997 suggesting it was still in service when Guards Vans were removed for trains in the mid to late 1980’s, that’s 100 years of service. In later years, some carried the QR logo and were classed BGV even with “First” still shown on the door. 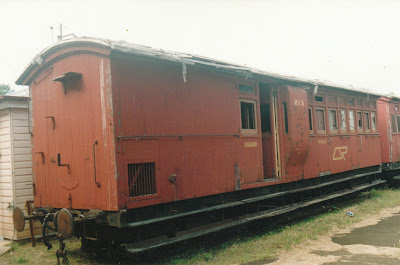 Photo:- Rob Farlow. Modified CV 283 with 2 compartments.
My van is made from Evergreen scribed styrene sheet and strips. The crown lights construction changed mid way, I was trying to use up some old Slater’s plastikard microstrip (cost .60c), that was a mistake. Old styrene strip can get brittle. The malthoid (canvas) look to the roof was achieved with used tea bag that had been washed out and cut into strips. The van was made with all the windows open and the Guard doors open for a change. Making more of the inside visible, the interior was painted. Seats, passengers and Guard was added.
To try something new, working compartment and tail lights were installed. The lights work off a 2032 3V button battery mounted on the van end wall. Being an older vehicle, the width of the underframe was too small for the battery to be fitted under the floor. The roof was made removal to access the battery and to turn on the lights if required. The lights were made up in two circuits, the tail lights are two red 0402 LED’s on a 2.2 K resister, the compartments lights are three 0402 warm white LED’s on a 1 K resister. All purchased off eBay. At first I could only get one set of lights to work, that is, tail lights or compartment lights. After playing around and adding resistor to both circuits, all lights come on. Having said that things could be better. I feel the tail lights are on the bright side and the compartments are a little dull. I guess the lights in the compartments on the prototype were not that bright anyway. My stock of resisters is not great, this give me something to think about next time. 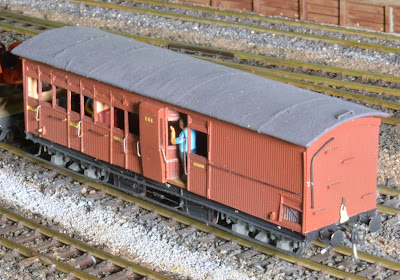 The van can be found working trains on the layout
Another welcome addition to the layout.
Posted by westgate swr at 16:30