Currently I have two QGX bottom discharge grain wagons in my grain wagon fleet. Queensland Railways were many years behind other rail operator to move to this type of operations. By large, wheat from the Darling Downs was conveyed to Pinkenba. State Wheat Board had a tippler for the gondola WH and WHE wagons and very little other operations were around at this time. . 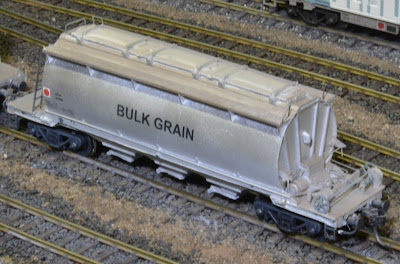 A prototype aluminium bottom discharge wagon entered service in 1965 as the VGY class, the class consisted of one wagon # 33769. Details are; Tare 12t, the gross weight on all lines 40.6t, some “B” lines 42.6t and “S” & “A” lines 44.7t. The unit length was 2.5, the same as the WH and WHE wagons. The draw pack consisted of self-container buffers, Alliance auto couples with transition couplings, D1 drawgear class. The wagon rolled on QR 22 bogies with 850 mm wheels and had a cubic capacity of 42.2 m³. Drawing P 212 suggest this was a Com.Eng built wagon. Filling the wagon must have been a pain, five hatches760 mm dia. on top of the wagon. The WH and WHE wagons with traps would of been much easier, undo the trap on one side, pull back to other side and the whole wagon was exposed for loading.

Willowburn May 1993
This pathed the way for the QGX wagon. The class numbers was built over many contracts.
Details are; Tare 12.2t, gross weight on all lines 40.6t, some “B” lines 42.6t and “S” & “A” lines 48.7t. The unit length was 2.5, the same as the WH and WHE wagons. The draw pack consisted of self-container buffers, National rubbers Sharon auto couples with transition couplings, D1 drawgear class. The wagon had a cubic capacity of 46.72 m³. The three fiberglass hatch gave an opening of 7 620 mm x 685mm. At first the wagons only had one walkway for loading. A second was added with later contracts in 1976, earlier wagons had the walkway added as the wagon passed through the workshops. From 1971 a modification was made to the centre hatch, wagons with modified hatch were recoded to QGX/C. The program lasted to 1979 and all wagons were coded back to QGX.
The wagons were fitted with a manually operated “Empty & Loaded” brake lever.  When the wagon was empty, the lever was set to “E” and when loaded the lever was changed to “L”.
Type “A”  Contracts details. 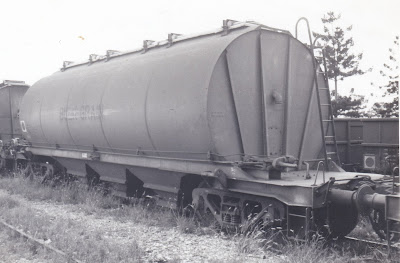 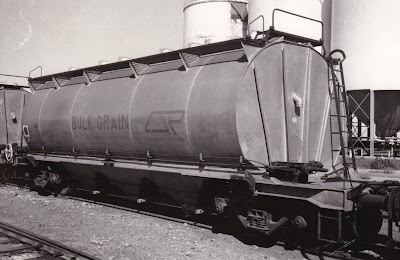 QGX/C (Mid 1970’s Logo added to the side).
In 1976 some “QGX” wagons have been modified and re classed “QGXM” for the conveyance of malt. The modification was the provision of plastic foam seals around the hatch coaming. The wagons were also marked “BULK MALT” on the side in 12” (305 mm) block letters instead of “BULK GRAIN” as previously. The wagons so re-classified must remain in use solely for the conveyance of Bulk Malt. Bulk Malt was also carried in HJM wagons (1968 – 25849, 25887, 25777, 25883) and PF 34269 (1968) wagons between Toowoomba and Cairns.
During their service life, fumigation outlets, protector plates over control rods were added to the wagons. 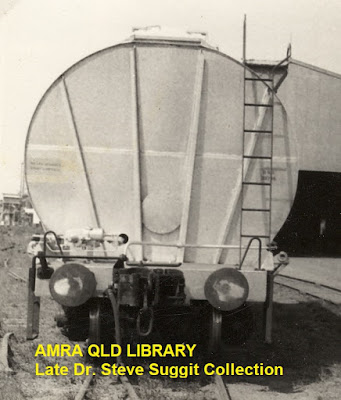 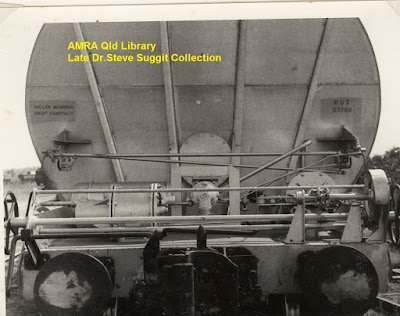 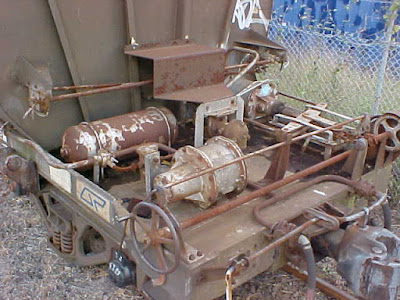 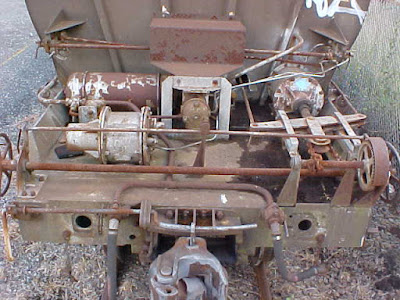 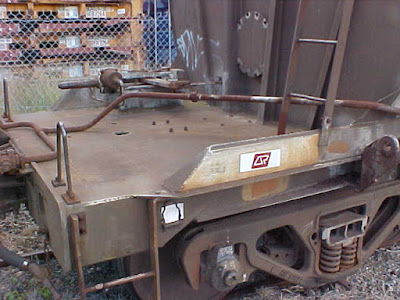 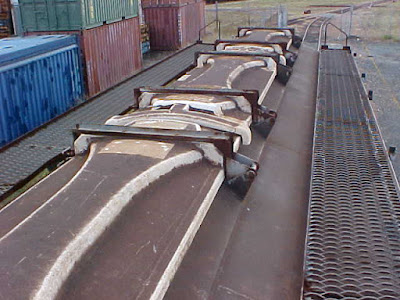 Roof hatches Type “A” wagons.
Type “B” These wagons were similar, but different to the other QGX wagons in traffic..

There was a reported sighting on one wagon having the “G” removed from the “Bulk Grain” on the wagon side, “BULK RAIN”.

QGX 43618 Gladstone Aug 85. J.Buckland Photo.
A number of QGX Bulk Grain wagons were modified by the removal of buffers and transition couplings and these wagons were reclassified as QGA wagons (W/N 13/89, dated 30-03-89)  This program was completed in 1993, 455 wagons remaining.
With the introduction for higher carry capacity coal wagons in Central Queensland, many of the lighter carry capacity coal wagons were allocated other work. Coal wagons had been used in the grain traffic before in peak seasons. 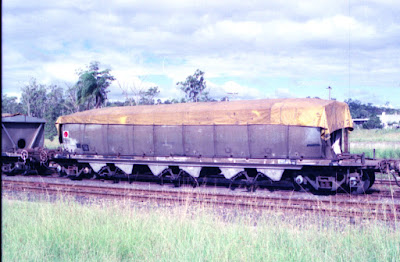 
With loaders being 3.5 metres above the ground became a WHS issue. When wagons were loaded, they were often controlled shunted on a grade or pushed by a tractor or vehicle, at times loaders were knocked to the ground.  The coal wagons had a higher carry capacity and stayed within the limits for “A” lines making them more suitable. This saw a decline in the number of QGX required with only 355 wagons in service in 1998, with the introduction of the VGH and VGK class wagons with air operated loading hatches in 2000, the numbers dropped quickly. By 2002, 36 remained in service for the Tolga to Kingaroy peanut traffic. The peanut traffic ceased in October 2003, with the last consignment of 11 wagons arriving at Kingaroy on 14th October 2003.   A few of the class can be found in Museums around the state. QGA 33885 at Capella, 33889 is in a mural with three other wagons at Clermont. QGA 44981 is part of the QR Heritage collection. 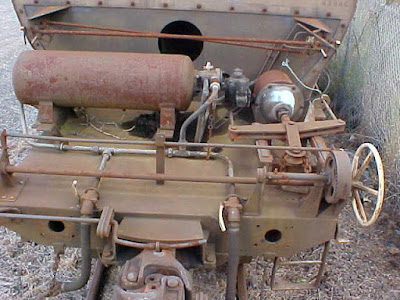 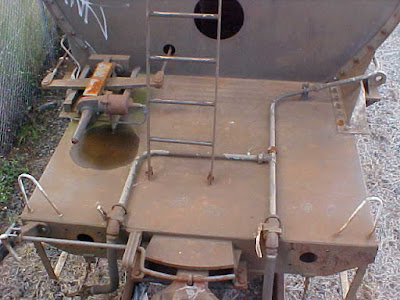 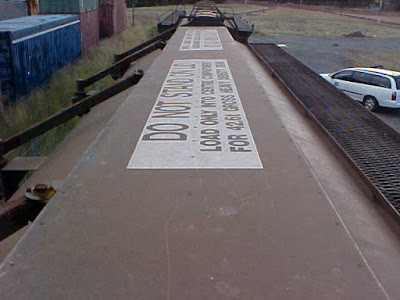 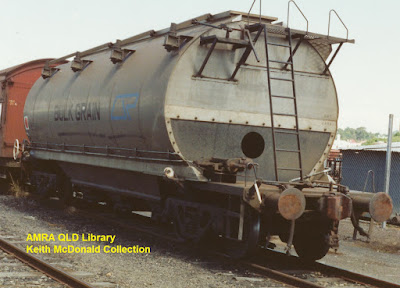 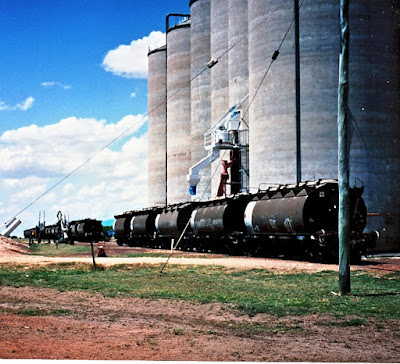 QGX wagons being loaded on the Downs.

This photos highlights not a big area is required for unloading, great for modellers. 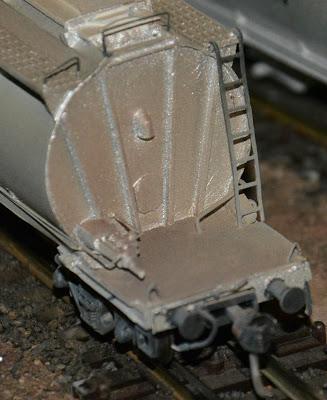 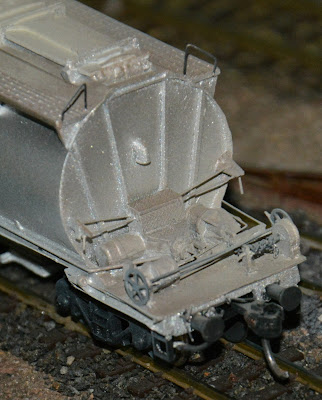 The two I have on the layout are PGC kits. Brake detail came from AR Kits brake parts and Kerroby Models. Brass rod was used for the piping and brake rods.
Enjoy your modelling.
Arthur.