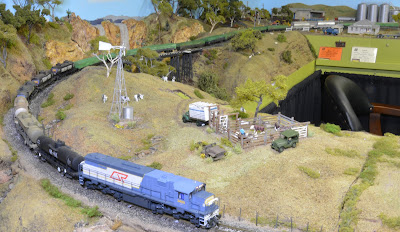 In 1969, Express Freight Train 632 commenced to run Monday to Friday departing Pinkenba at 12:45pm. Most new wagons built from the mid 1950’s were fitted with 3 piece cast steel ride control bogies. Until 1969 these wagons were classified as “Goods Wagons” with a maximum speed of 35 M.P.H. (after 1972 this became 60 Km/h). In 1969 most of these wagons were upgraded to Express Freight status increasing the number of Express Freight Services on the network.


Leaving Pinkenba at lunch time, the train consisted of empty grain wagons. In the late sixties that was WH, WHE and QGX wagons and a van.  In the early s1970’s this started to change, WH wagons received new QR 20 bogies and reclassed WHA, auto coupling were being added to WHE wagons, thus WHET class, QGX wagons were being modified with new roof hatches and a second cat walk being added to make a temporary class of QGX/C to about 1979. The load to Toowoomba for a 90 T DEL’s (1450’s DEL’s upwards) was 630 tons with drawgear. The load with ordinary rollingstock, later known as D4 drawgear (four wheelers, H, K, C, S wagons etc.) was 430 tons. The other factor that came into play for marshalling trains was the length of 90 F or equal to 90 “F” wagons, in later years this became a unit equal to 17 feet, 6 inches over buffers. With the introduction of the metric measures in the early seventies the unit became 5 metres, and train length became 95 units. In the original measure a “F” wagon was equal to 1F or 1 unit, “H” wagons was equal to 2, WH was equal to 2.5 units etc. Each wagon on the network had an allocated length, after the mid 60’s this was marked on all wagons. Using WH wagons for our train, 2.5 into 90 units equals 35 wagons and a van, at approx. 12 ton each gives us a load of 432 tons, about 200 tons under a full load Brisbane to Toowoomba.


The load for trains south and west of Toowoomba was much higher, this creating issues for QR getting tonnage to Toowoomba and making use of available engine power on trains to Toowoomba. Our train of empty grain wagons at the maximum length, but is 200 ton under the load. Grain trains running from Toowoomba to Pinkenba were somewhere between 22 to 27 wagons subject to class, where the wagons were loaded and type of grain being carried.  If the same train was returning to Toowoomba empty, the load would be considerably less. On top of this you need to balance your locomotives, more or less, what go up needs to come back down or back to Brisbane.


The simple answer to the issue is to top up the trains with loaded wagons. Yes, that sounds good, but most goods yards worked 7:00 am to 4:00 pm. During this period wagons in the sidings are in various state of being loading/unloading, to get a couple wagons out of the string would mean shutting down the siding and stopping work on all other wagons. Plus the load in other wagons would not be secured, moving them would cause damage to the load and wagon.  The answer for the situation was on the Pinkenba Branch with the oil companies, thus the timed stop at Whinstanes.


At Pinkenba there was Shell, a big company with a huge terminal with 3 roads, 2 for loading tank wagons and the drum road for loading open wagons, repairs etc.. The terminal could hold a full train if required and generally the following train to Toowoomba 642 convey these tanks. Large number of Shell tanks were fitted with bar frame bogies and could not travel on Express Freight services. Esso and Amoco were also at Pinkenba, both these companies were much smaller with limited depots in the South West. Amoco had the QR contract for diesel fuel sending tankers to depot stations like Toowoomba, Goondiwindi, Roma and Charleville.


Whinstanes was much the same, BP was a big terminal with 3 roads much the same as Shell, but not as big. Golden Fleece and Caltex were much smaller but send fuel to more locations in the South West than Amoco and Esso. After the morning peak passenger trains a shunt would arrive at Whinstanes from Mayne with butter and empty tank wagons. Tank wagons were privately owned by the oil companies and were give high priority in transit in both directions.  Around lunch time Golden Fleece and Caltex would be looking for a shunt to replace the loaded tanks with empty tanks to load for the evening trains. The Whinstanes shunt engine and crew would shunt BP and Caltex, the Lad Porter (This had to be a Porter over 18 years old to shunt) from the station would take the Mayne engine and reset Golden Fleece. All loaded tanks were placed in a siding next to Main Line.


Approximately half an hour before the arrival of 632 at Whinstanes, the Train Control would advise the Assistant Station Master how much was to be added to the train. Quite often six (6) small tanks (approx. 200 T) was added to the front of 632 using the train engine.


Train 632 arrived in Toowoomba before the evening western and southern trains departed, allowing loading for the far west to continue without delay. The later fuel train 642 only had connections to Warwick and Dalby. After 1981,train 642 became Train 7680, and in 1985 was still a “Goods Train” with a maximum speed 60km/h as many of the older small tank wagons still had bar frame bogies. In the early 1990’s, tanks wagon were modified and many were placed on underframes off QLX’s, HO’s, WHE’s, etc., the train became a Fast Freight train 6694


48/60 Ton RTC can only travel on “A” class lines (15 Ton Axle Load - TAL) or “S” (20 TAL) lines. Thus during the 60’s/70’s these wagons were restricted to the Toowoomba Area, Warwick, Dalby, Miles and Roma fuel depots in the SWD.  In later years Goondiwindi was added to this list.


This list is a short overview of tank wagon operations across many years and eras. It would take many pages to detail the operation of Rail Tank Wagons on the QR Network.


On Westgate:- My Train 632 has tanks on the front and empty grain wagons towards the rear. It was common practice in the 60’s/70’s to have loading wagons on the front of the train with empty wagons on the rear. Behind the hauling loco is Mobil and Ampol tanks attached at Corinda, then Golden Fleece tanks attached at Whinstanes and empty grain wagons on the rear. The train falls short of a full load, 65.4 unit for 447 tons. The maximum train length on Westgate is 66 unit with restrictions without clogging everything.


The tanks are a mix of kits and scratch build dating back to the 70’s. Some are starting to show their age and replacement is being considered. The WH wagons are scratch build, the QGX and WHE wagons are PGC Kits. The CLV Guards Van was my first carriage I built in the early 1970’s, it to is starting to show its age. At a club meeting not long after being built a guy stood up under the layout it was running on, the van hit the concrete floor. You could have heard a pin drop. The van was repair with some alterations. The bogies are H0n3, the sideframes were extended and biro tube was used to lengthen the wheel sets.


Hauling Locomotive :- Southern Rail’s 2400 class DEL fitted with sound is on it first outing on the test run to Toowoomba.

Tank wagons on the lead are a mix of kits and scratch built. 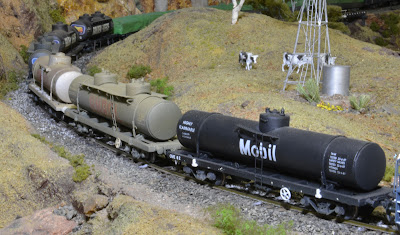 WH wagons are all scratched built. The QR 5 bogies were a special order done by the late Rodney James of AR Kits for the AMRA Queensland Group and sold to members through the “Sales Cupboard”. K & M wheel sets were used in the bogies.

WHE and the QLX’s are PGC Kits.

The Guard’s Van was scratch build in the mid 1970’s long before Evergreen sheet was available. Silicon rubber was poured over the styrene master by the late Jim Fainges, the mould was available to AMRA Queensland Group members, Plastic Bond was used to fill the mould to produce the model. Even lettering them days was free hand. 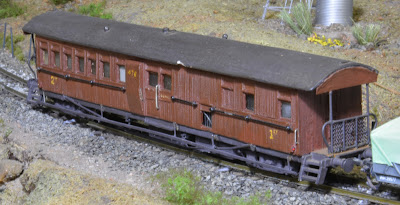 Another blast from the past. Trust you enjoy the story.
The train running on the layout can be found on YouTube
https://www.youtube.com/watch?v=NlAHoYlHJFs