Five separate listings are shown for the vans with passenger accommodation. All with the exception on one van are known at “Griffith’s Vans”. The name comes from the manufacture of the first contract “Griffith Brothers” (Toowoomba Foundry). The vans are shown in four categories within three types. One, two and three passenger compartments conveying 10, 20 or 30 passengers respectably. All vans were equip with dog boxes and the one and two compartment vans were the only goods van to be fitted with coffin chambers 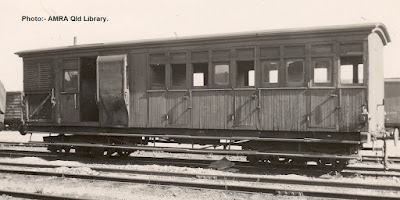 Plans show the vans were fitted with gas lights, some notes showed a few had electric light. In the 1960’s, most vans in the class were “black out” vans, in other words they had no lights. Kerosene tail/side lights marked the end of the train at night. The Guard used his kero shunting light for his compartment. Most of the livestock vans were the same, in the late 1960’s on the Mt Isa line guards were issued with battery Latten lights when working train with these vans.

Some of the class had electric lights fitted in the late 1960’s early 1970’s. Around the same time the vans were classified BGV, I guess to reflect they had 2nd class passenger compartments. 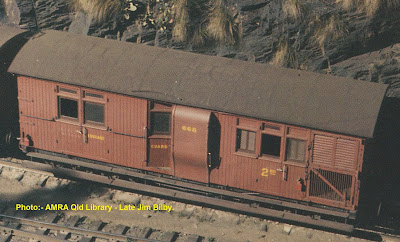 The vans were 7ft 6 inches wide, the timber wall boards were wider than the later vans and passenger cars.  Most vans appeared to have 4 ft 6 in Angle Iron Bogies with 2 ft 2 in wheels, some also had the bar frame bogie. Buffer did very a bit for van to van. 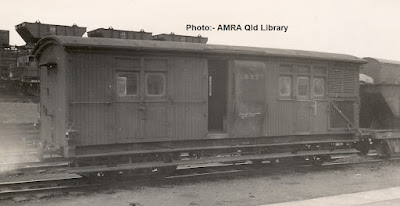 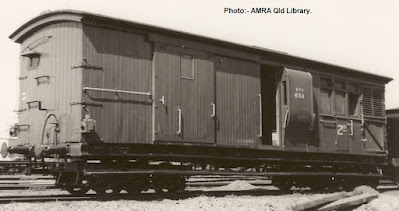 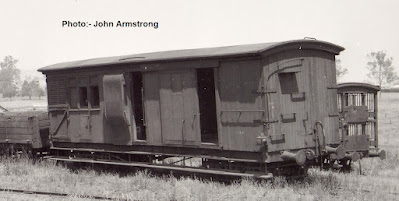 Photos show a few modifications surfaced over the years, In later years the doors did not have windows. Some also lost their coffin cambers and were fitted with electric light. 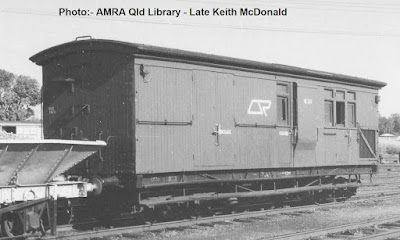 I think this one could be a project down the track!!

The transportation of dogs and corps are covered in the Coaching By-Laws, that’s item carried on passenger trains in Guards Vans and Baggage Cars.  Both were still carried by QR up to the early 2000’s. This is one of the reasons why MMV vans stayed on the western mails after two driver operation (TDO) can in. In 1970, a corps was conveyed at the rate of 10 cents per mile. Special conditions were required over 100 miles. They were allowed between Brisbane and Toowoomba (101 miles) and Gympie (106 miles) without these conditions. At one time before the rule was changed, a special stop was made at Harlaxton (99 miles) to unload coffins for Toowoomba.

Senders of dogs needed to supple a chain to secure the dog into the dog box on guard’s vans. Other small animals such as goats and sheep will not be accepted for conveyance by passenger trains unless they are contained in suitable crates, in which case they may be loaded in either the guard’s van or dog-boxes. The Commissioner will not be responsible for the safety of dogs and other small animals and when necessary a drinking vessel must be supplied by the sender.

The rate for conveyance of dogs in dog-boxes or Guard’s Vans which must be prepaid in all cases, were as follows in 1970.

and 30c for each additional 50 miles or part thereof, but in no case shall the charge for a dog be in excess of the second class passenger fare.

Dogs and other small animals must be removed from the station premises immediately after the arrival of the train, otherwise they will be maintained at the owner’s risk and expense; and if not claimed within three days they may be sold at auction, and the proceeds applied in payment of all expenses incurred and the balance handed to the owner or consignee.

I have observed up to four dogs in the dog box on the Westlander at Charleville.

For the layout I chose a 28 ft version with double luggage doors with windows. For me a short van at the back of a train looks better on a small layout. In operational prototype practice any vans were used on trains regardless of their length, at times 50 foot vans worked trains consisting of four wheeled coal hoppers. In later years conditions was placed on the weight of a van working express freight trains, I think they had to be over 16 tons tare. 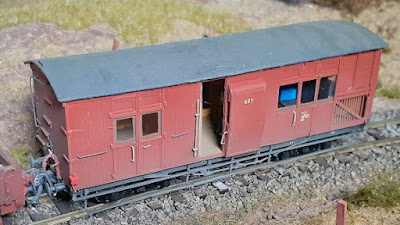 A spare crew is travelling passenger returning to their depot with their tucker boxes on the seat. A water bowl of drinking water for the dog has been supplied in the dog box.  Styrene blocks have been painted for goods/parcels in the luggage compartment.

The van was built with guard’s doors open and the windows in the passenger compartment down. I think this beings a new dimension to the layout and was very prototypical for a good’s trains.

Evergreen scribe and strip styrene was used to make the van. The roof was made to be removable. The canvas top is a washed out used tea bag and glued into place with super glue. The strips were cut three scale feet wide.

The sides and ends were airbrushed with PGC “Passenger Red” Acrylic Lacquer.

After the decals were applied, sides, ends and underframe was sprayed with SMS “Flat Clear”

The van was weathered with the following

Part 2 next time will cover the construction of the 32 ft, 2 compartment van.

QR List of Classes of Coaching Rollingstock and Description.

Trust you find the information helpful and assist you in your modelling projects.

Until next posting stay safe.