For some time I have been researching how I could add tank wagons to my operations. One of my operations systems is to marshal a train with various destinations, you making up a train into destination blocks and then place the blocks of wagons in station order. Tank wagons could be adapted to this system without too much effort. The other system is to work a train to a smaller station (the other station on the layout) and shunt the yard. Wagons on the train are placed in various locations and some wagons in the yard are added to the train before leaving for the next station. http://westgateswr.blogspot.com/2019/12/prototype-operations-for-small-layout.html

Tank wagons in large are loaded at a coastal port terminal location and then sent to country depots in principal towns. Once unloaded the wagons were returned to the same coastal terminal. 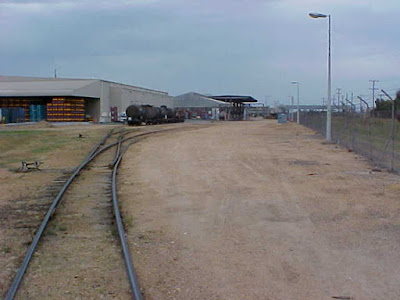 The unloading process at country depots can vary so what, most have a set location. Many are private siding within a depot compound. 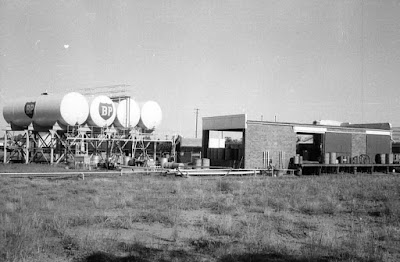 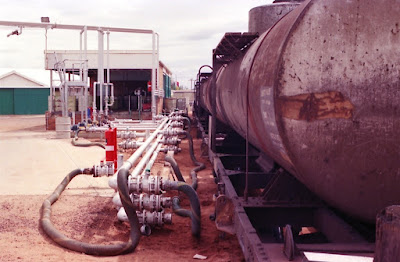 Others are departmental siding near the depot, the tank wagon discharge their load into pipes beside the track. 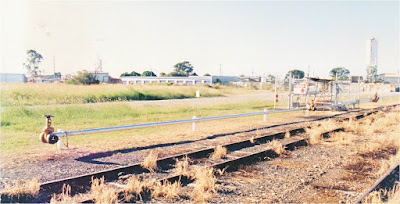 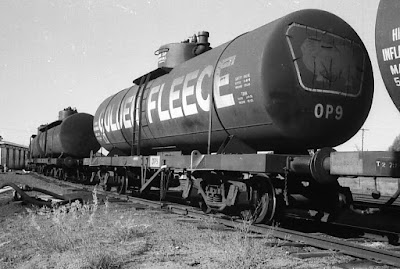 This departmental siding at Charleville had unloading points for Ampol, Mobil and Golden Fleece. The Ampol depot was adjacent to the track, Mobil Depot was over the road in the next block about 100 metres away. The Golden Fleece depot was located in the far left hand corner of the block over the road some 200 metres away.  Just think of the local shunters, they would need to cut them out of the train, most likely they would be in various parts of the train given they had come from three separate loading locations.  Set then up in the correct order for each set of discharging pipes before heading off to the siding for placement. 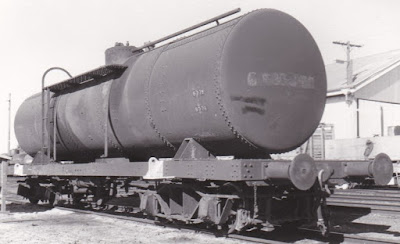 This OB Shell tanker at Charleville is placed beside a manhole pit and connects to pipes running underground to the local depot in the next block out of view from the station. The siding beyond the unloading point was used to load wool from a side loading bank. Something like this would be very easy to set up on the layout.

For me all of the above was out of the question, the station size was much smaller and if the layout was altered for this type of traffic, it would not be available of other types of traffic. Thus, reducing what I could do at the station. Digging around a bit more, the penny dropped, what about bitumen wagons. In the mid 1960’s a number of companies had tank wagons conveying bitumen for road works, many country roads were still dirt and the push was on to have sealed roads. All that was required to discharge the wagon was a siding with vehicle access. This was something that was available in most station yards and used by various consignee/consignors to load and unload their goods. The bitumen spray truck would park beside the wagon and the bitumen was decanted from the wagon into the truck, no special arrangement need.

Looking at the various bitumen wagons operating on the network, Emoleum wagons had company markings and were chosen to fit the bill. The company had a small fleet of 10 wagons, two were 48 ton gross, the rest being 36 ton gross purchased from Vacuum Oil Co later know as Mobil. 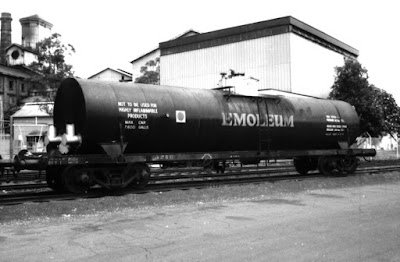 These two wagons were the big boys of the fleet and were restricted to 15 ton axle load lines.

The wagons were purchased by Vacuum Oil between 1951 and 1953. All wagons has QR 4 bogies 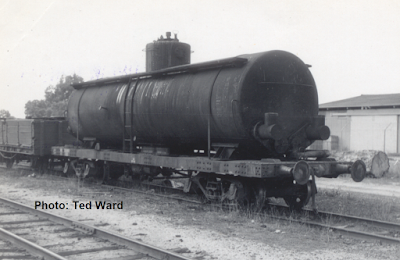 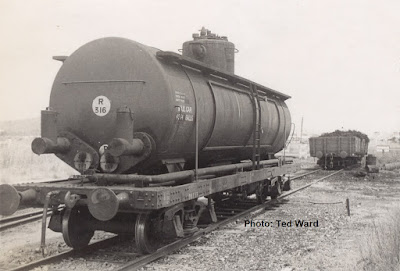 Around 1962/63 the class was reclassified OVO or OFO if in the Emoleum fleet. Why, this is some what bit of a mystery, around the same time WHO and CO wagons were entering service, later the “O” on the end of the classification indicated a 15 ton axle load wagon, gross 60 tons for an 4 axle wagon. Some Shell OB wagon were changed to OBO and some Caltex OT wagons were changed to OTO. The common factor was all these wagons had a gross weight of 36 tons, whereas all the other 32 foot tank wagons had a gross weight of 32 tones. Plus they were all oil or bitumen wagons.

Maybe the Goods and Livestock Rate Book holds the answer. A clause in the book states along the lines that 1½ ton overload was allowed on the 32 ton gross wagon, but not overload was allowed on the 36 ton gross wagons, maybe the reason behind the class change. All wagons reverted back to OF class around 1971/2. From 1984/5, all tank wagons on the QR were renumbered with individual numbers for the Rollingstock Information Control System (RICS). If modelling a period after the mid 1980’s the Dangerous Goods code came in, DG information panels were added to tank wagons carrying fuel etc. I’m aware of the class 9 panels on bitumen containers around 2000, but don’t recall panel on wagons including the containers on the PCBY wagons prior to this.

Prior to the RICS classification, the tanks were fitted with outside insulation changing the shape on the ends. 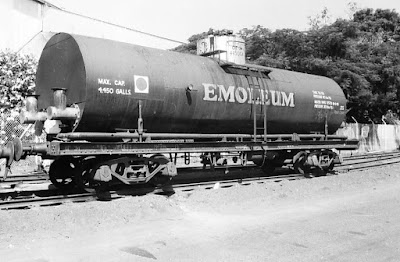 Like most tanks wagons, many were modified in the early 1990’s

Over the years I used various materials for the tank. Most tanks on 32’ wagons running on the QR are 6’ 1½” inside diameter. For H0 I’m looking for something around just under 22 mm in diameter. Looking around in shops today, most PVC tube is 20 mm or 25 mm, that’s a bit of a bugger. I’m sure a few years back we could get something closer to the correct size. Of late I have been using 25 mm acrylic rod turning it down in the lathe to the correct size. This makes a heavy wagon with a centre of gravity higher than I would like. I like a wagon to have a bit of weight, most of my 32’ wagons around 50 grams. School is still out and I’m still looking for something a little lighter. 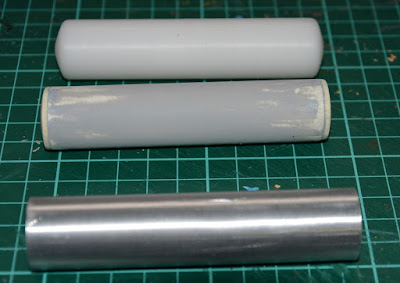 A jig was made to assist in having the top and bottom square and for drilling square holes for mounting bogies. 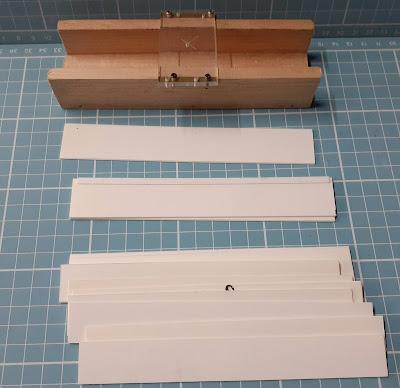 Another jig has been made for aluminium angle to help with keeping walkway straight and in the right place. 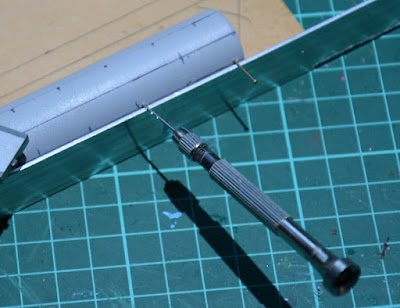 Again, I have made a jig for building up the underframe. I use the same jig for both brass and styrene frames. 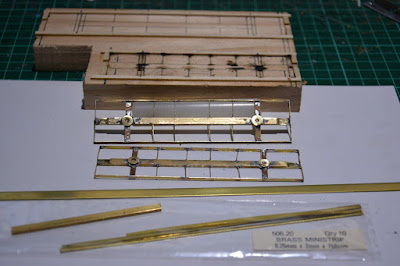 Brass bar and shim is purchased from North Yard in New Zealand.

OFO 38 has a brass underframe as above in the jig. Total weight ended up 88 grams

A few years back I was marked down in a contest because I didn’t have brake gear under the wagon. Most of my models are for operations and I only add detail that is visible when the wagon is on the track. This time around I did add the pull rods and foundation levers.

Dome made from Evergreen Styrene tube and Acrylic rod turned in lathe for the top section.

Other details parts were formed from Evergreen styrene strip/rod.

The wagons were painted with Mirotone Etch Primer Black (Gloss). Due to the poor finish I left on the tank after turning in the lathe, Testors Glosscote Lacquer was brush painted where the decals were to go in an effort to smooth up the tank sides. Decals were made by using “word” and were printed by Ted Freeman in Toowoomba.

To assist in placing decal square and on the same level as other wagons of the same class a tool was made up from a piece of acrylic sheet, as series of parallel lines were scribed on the sheet. I should have done this with different spacing between the lines.

Decals were applied using Micro Set. Once dry, Micro Sol was applied to pull the decal into the surface. When dry the decals were sprayed with another coat of Glosscote to hind the decal film. Before weathering commenced, the wagons was sprayed with Testors Dullcote Lacquer.

To mark the location to place/spot the wagons during operations session, a bitumen spray truck was made up using a Classic Metal Ford fuel tanker. The tank section was modified and repainted, an operator was added to give action to the scene.

During operations the rail tanker is placed beside the road tanker for unloading.

I made the wagons as built and added decal as per the later insulated wagons, I could not establish how they were decal when transferred to Emoleum ownership before the insulation was added.

Trust you find the information helpful.