SM wagons were converted from S wagons in 1963 to carry cars and other wheeled vehicles.

This was around the same time as many branch lines were closing. A number of S wagons were also converted to SP and SS class wagons.

Prior to 1963, wheeled vehicles/cars etc. were conveyed mostly in open wagons from the “H” & “F” family of wagons. The wagon was placed beside a high level bank, most stations had a bank somewhere in the yard. The doors were dropped onto the bank, generally this was done with the assistance of a # 10 boot from inside to get the door off the stanchion pin. The door made a ramp to drive the vehicle into the wagon. To get the second car into an “H” wagon, one needed to be good at reverse parking. There was a number of four wheeled open wagons specially modified for end loading of vehicles. FM (15’), FJM (17’ 6”), and FGM (20’) had ends that could be folded down over the buffer to provide access for an end ramp. To secure the vehicle from movement during travel an old sleeper was place in front of the front wheel and a second sleeper was placed at the rear of the rear wheel. For wooden floor wagons the sleeper was nailed to the floor, sometime a pine chock was nail in front of the sleeper to stop it from moving.  For steel floored wagons (FJS/HJS) the sleeper was braced to the end of the wagon. Two extra sleepers were placed into the wagon, one hard up at each end of the wagon, sawn mill offcuts were nailed to the sleeper under the car wheel and the sleeper at the end of the wagon. This stopped the sleepers from moving and prevented the vehicle hitting the end of the wagon during travel. Having said that, a large number of vehicles coming from the bush arrived in Brisbane without being secured. Most times the vehicle was damaged from coming in contact with the end of the wagon during shunting. During this era, all shunting was done by kicking wagons and let them go, generally they stopped when running into another wagon or the stop blocks. 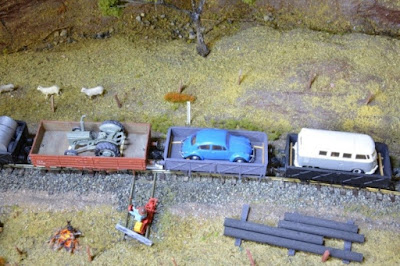 This new type motor vehicle wagon brings another class of platform wagons onto the QR network. In 1963, fifty 30 foot “S” wagons were converted to carry motor cars, they were classified “SM” wagons. The wagon had four securing bars that could move along the wagon across the floor, plus each bar had two brackets (one for each side) that could move across the bar. Bar and brackets were secured with bolts and nuts, loosen off the nut and the bar/bracket was free to move to any locations. The bars were placed under the wheels (one each end) and the brackets slid into beside the wheels. Tighten up the nut and the job is finished, no need to cart old sleepers to the wagon. To get the cars on and off the wagon, six portable ramp were provide, brackets on each side at the end of the wagon carried two ramps down beside the bogies. The ramps could be used for both side and end loading.  It didn’t take to long before wagons were arriving without ramps, stations loading cars didn’t return the ramps to the wagons after loading. Or maybe they were just collected their own supply of ramps. After time the brackets were removed from the wagons, they would have been a pain in the butt for Train Examiner’s testing trains and changing brake blocks. 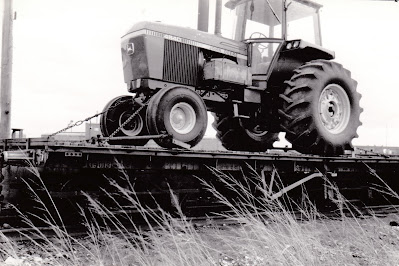 Larger, heavier tractors had chains as well for extra securing

The attention of all concerned is drawn to a new system of classification of motor vehicle carrying wagons. The new classification are being introduced to simplify identification of the wagons in accordance with their length. The following classes apply:-

Class MS – Wagons up to 9.5 metres over headstock.

To comply with the new system, the following wagons will be re-classified.

The “M” wagons lasted until the disposal of wooden wagons in the later 80’s. HO/HOF wagons with damaged side/ends were cut down to platform wagons. Securing bars were added much the same as the “M” wagons and classed PHO wagons. These wagons could carry much heavier loads (42 t) and could run on express freight service, more with the requirement of the day as most trains were Express Freight trains. Later, PHO were reclassified to PHOA and PHOB to identify ownership.

A number of MTW were also converted to carry vehicles 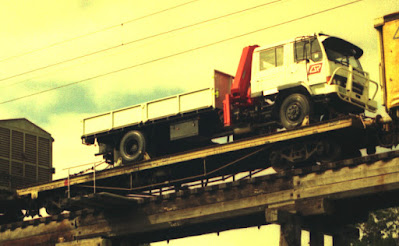 Operations:-Once again I will go back “Mayne Yard Orders” for Tuesday 13th of March 1984 to give some idea on the movement of these wagons.

These wagons were also used for other traffic, loading of machinery, plant, tractor, rain water tanks etc.  They were used a runners/cover wagons for long loads as well. 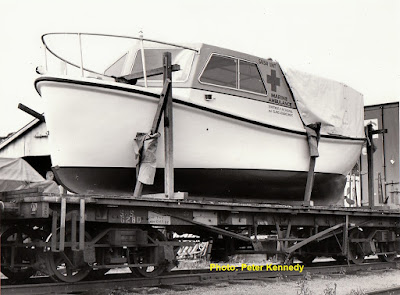 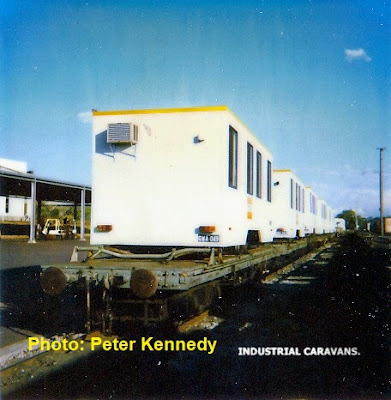 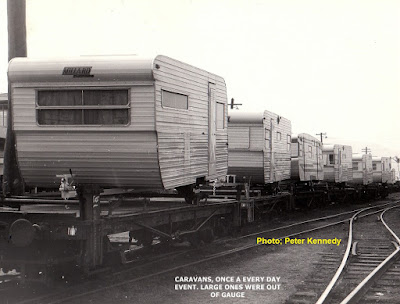 SM, M and other flat top platform wagon were used as runner/cover for long loads that extended beyond the loading wagon.

Here we have 80’ piles loaded at Traveston for Melbourne. A PHO and a M wagon has been used as cover/runner and will travel with the QFC to Clapham.

Conveying vehicles was big business for QR during the 60’ and the 70’s. Monday to Friday there was the GMH shunt to Acacia Ridge. A Night Office (6th class ASM) would travel on the shunt from Rocklea to work the cabin. The train would stop short of Boundary Road, the Night Officer would walk to the cabin and cut the cabin in and admit the train to the yard. Much the same in the reverse when the train left the yard. The narrow gauge section of the yard consisted of a loop and a dead end siding into GMH. The standard gauge section of the yard was not much different. The loaded wagons were pulled out and a reset of empty wagons were pushed up into the loading ramp for next day’s loading.

Westgate:-Over the years I have built a number of these wagons. All were built from Evergreen styrene sheet and strip. All are fitted with Caintode Flats bogies, some have the 4’ bar frame, others have the 5’ bar frame bogie. Most have 2’ 2” wheels. Archer rivet decals were used for the solebar detail. I only have one packet of double row for tankers. I was able to cut down the centre of the row and then cut off a pair for adding the wagon. Maybe a bit small, but very easy to do and effective. The wagons were painted black, to try something new I used “Tru –Color” weathered black (Austral Modelcraft) thinned with acetone.

Wagon 1.  SML is loaded with 2 Holdens, they are Road Ragers Cooee Classic EH Panel Van and EJ Ute. Not that much different between the two cars to hold my era, the EJ was loaded as the second vehicle to hide the front of the grill ?? The wagon has the ramps in the brackets. The vehicles are secured to the wagon using the securing bars fitted to the wagon.

As more vehicles were added to the range, more wagons were built.

Wagon 2. SML is loaded with 2 Land Rovers, these were “Herpa” desert units which were repainted grey to give that Aussie look. Maybe a little later in era. The vehicles are secured to the wagon using the securing bars fitted to the wagon.

Wagon 3. SM with caravan load. When I worked at Rocklea, loading caravan occurred just about every day, there were two caravan sale yards on Ipswich Road. A lot of their sales were to country areas and the vans were railed west and north. The van is a “Viking” model some years old which was repainted to reflect the 60/70’s era. Securing bars are used each side of the tandem wheels like a car, the other two bars hold a sleeper on its side to support the tow bar with some additional sawn mill off cuts for packing. The tow bar is chained to the securing bars, scale chain was used. The rear end of the van was secured with galvanised round wire (good old # 8 has another use), cotton for the ECO’s sewing cabinet was used. (Bugger, it still sitting on the bench, I better return it before to long).

Caravans with A/C unit or a little higher than standard were loaded with their wheels removed. The axles would sit on sleepers and chained to the wagon. At times these vans were also loaded onto well wagons. The PJW was often used for this traffic. 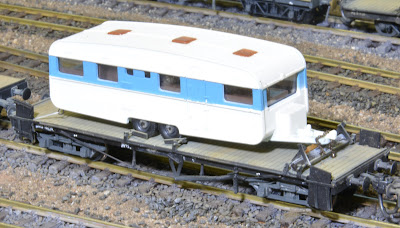 Wagon 4. SML is loaded with 2 small caravans, I think they are “Viking”, been in the box for a long time, like about were repainted and loaded in the same manner.

Wagon 5. SM wagon with grain auger. The auger was scratch built with Evergreen styrene and brass round wire. 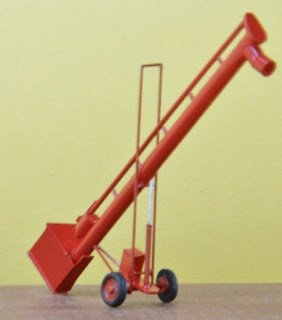 Materials used for building the auger are as follows.

Electrical Box:- Evergreen .125 x .125 moulted on piece of .020 styrene sheet which sat on the wheel axles and frame, also gave a mounting place for the lifting ram.

Wheels/Axle:- Ripped of a car from the Corn Flake packet.  Wheels off any vehicle would be OK. (Cheap cars from a Buy & Sell etc.).

Hopper:- .015  styrene sheet, a few balls of lead shot was added to keep the thing upright if required for yard operation.

Paint to colour of choice, I have Blue, Red, Green & Yellow.  (Different manufactures ???) 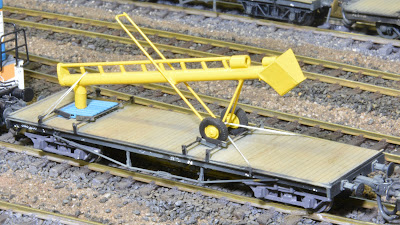 This load may look to be to high and be “Out of Gauge”. Most rail networks have various gauges which allow trains to operate without running into trouble, Structure, Rollingstock and Loading gauges.  The 1962 General Appendix shows the loading gauge upper limit at 12’ 6” (from rail level) provided the load is within 10” of the track centres. At sounds great, but when out in the sticks and going to pick up this load, you don’t have a tape in our back pocket. If you pick up the wagon and the next bridge remodels/shapes the auger, it’s done come Monday. Out in the field, high/wide loads were sized up with other rollingstock. Most DEL cabs were 12’ 6” high, some a just a little higher. Most were also on the limit for width at around 9’. QLX/ALY’s were just over 12’ high and were on the limit over the door runner at 9’ 4”.  If you considered the load to be to high, leave it behind and report the matter to the Station Master or Train Controller.

I was always thinking about what load I can put on this wagon. Yes, loads give your railway a reason to be there moving goods/freight. But, do all wagons have a load, and the short answer is No. In a number of my blogs I been referring to “Wagon Orders”, empty wagons being supplied to stations to convey customer’s goods/freight. A wagon loaded with a new car from a manufacture heading out west will not have a return load, thus the wagon is returned empty to the big smoke for its next load. When you look at the QR network, in the general goods/freight business, trains leave the capital or major coastal centre with most wagons loaded. There is very little business in these western centres that can offer a returned load for most of the wagons going west.

When it comes to operations on our layouts we look for wagons that you can’t tell if they are loaded or empty, box wagons, tankers, covered hoppers etc. Empty platform wagons can be used very well in operations, as above in supplying orders, being moved around the yard from siding to another and then returning empty to the big smoke. Having a few in selected locations as “hold back” wagons also makes the operator think about their moves.

Trust you found the information helpfully, enjoy your railway.