Most rail operators had special carriages for VIP’s when they travel around their area of responsibility.  Queensland Railways had several cars around the state. Carriages were allocated to heads of state, the Governor, Premier and government ministers. Departmental Commissioner, General Managers and some District Superintendents also had carriages they used for inspections etc. Some were used by staff when carrying out special projects. 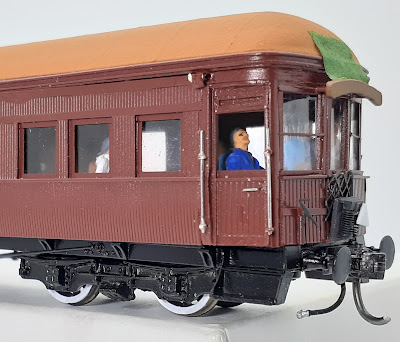 The January 1963 “List of Classes of Coaching Rollingstock and Description” showed two classes, Miscellaneous Saloons and Inspection Cars, remarks showed them all as Special Purpose Cars. All cars were rated as “First Class”.

Car 920. The plan book shows several alterations and titles for the carriage. Early plans (1918) show the carriage as 12-wheeler Special Inspection Car. A later plan (1932) shows the carriage was an 8-wheeler fitted with plate steel bogies. Other plans dated 1950 and 1958 show altered interiors. 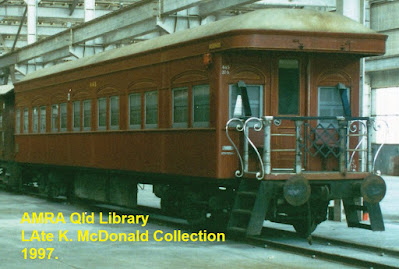 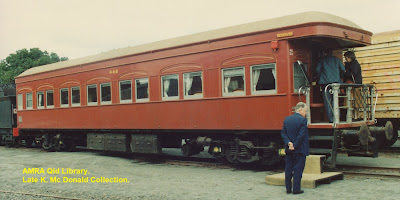 Car 445. Carriage Plan P 6A shows several alterations were made to the carriage, modified for the royal tour, upper berths removed, fitted with Commonwealth bogies and is now on display at the Ipswich Workshop Museum. One plan suggests the carriage was built in 1903 and was modified as a Vice Regal carriage in 1932, the plan shows a clerestory roof.

Car 561. Built in 1911, modified in 1932 as the Commissioner’s Car, again in 1958 as the Hallade Recorder, this equipment was removed in 1981 and the carriage became an Inspection car at Rockhampton.

356 and 359 were built in 1898, No dates shown when converted to Inspection Car. The carriage had Pullman berths, two toilets, a circular bathtub and an ice chest. 359 was later made into a Camp Wagon. 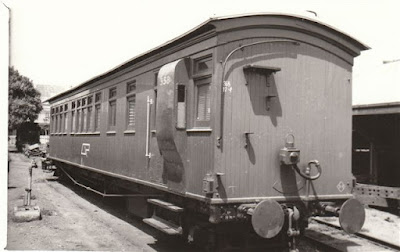 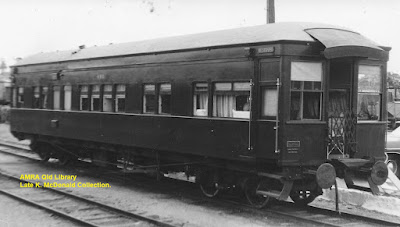 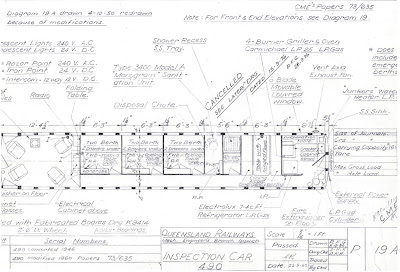 Interior plan of Car 490 dated 1960. The location of cabins, toilets and showers varied from car to car. 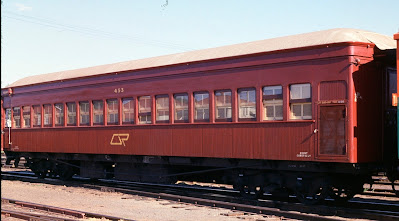 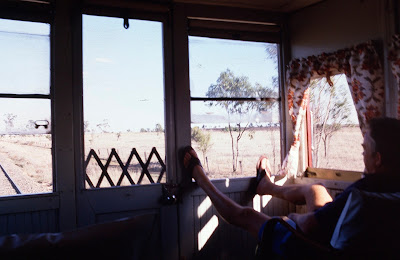 A view from Car 453 being trailed on a train west of Roma. 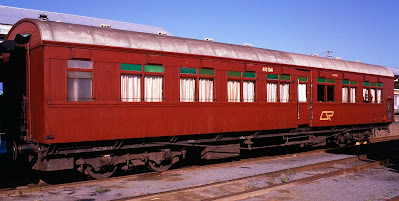 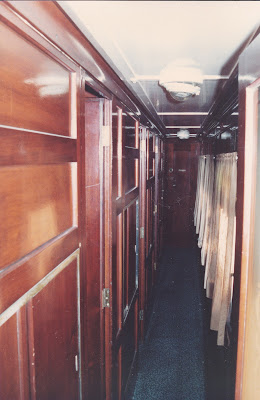 Most carriages were converted from end veranda cars, one or both ends were enclosed. Most of the older carriages had an observation saloon on one end. All carriages were fitted with side lights to allow the cars to be the last vehicle on a train.

All carriages appeared to be fitted with a dual electrical system, 24 V. DC for on train power and 240 V. AC for when cars are being used then stabled in a siding, i.e., platform dock.

Not all carriages had a kitchen included.

At times, Vice Regal and Ministerial tours consisted of three cars, generally the cars would trail behind the guard’s van. When passengers were being conveyed in wooden cars, these cars must not be marshalled between steel vehicles. 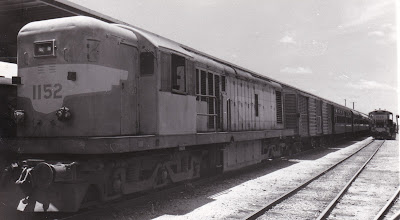 DEL 1152 works a replacement Sunlander due to flooding. Passengers transferred to the air condition train at Townsville. Ingham 1978. 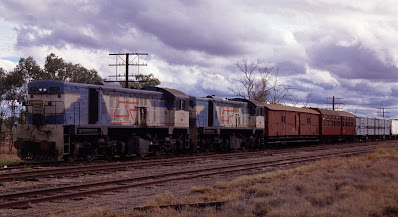 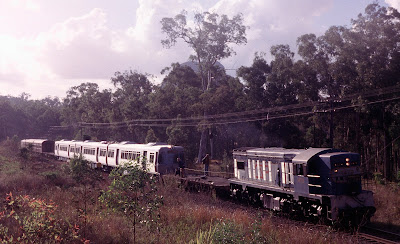 EMU # 1 being delivered to Mayne from Maryborough, note the cars at the rear of the train. How about the spotters on the leading wagon to ensure the EMU has clearance? 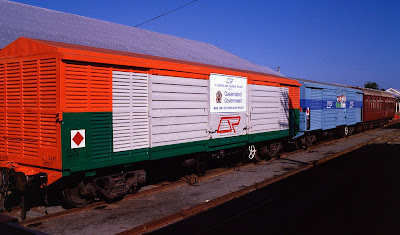 Car 1236 with MLE and Traveltrain promotional wagons at Maryborough

The MLE Wagon (Main Line Electrification Project) was an “N” scale layout showing what the new electric trains would look like. The layout was built in 1985 by members of the Australian Model Railway Association (AMRA) Qld Branch, of which I am a member, at the time I built some 60 wagons, as well assisting with the track laying and scenery work for the layout. The layout could be removed from the wagon’s rear doors for displaying in shopping centres and the like. The Traveltrain wagon was a static display highlighting Queensland Railways long distance trains. 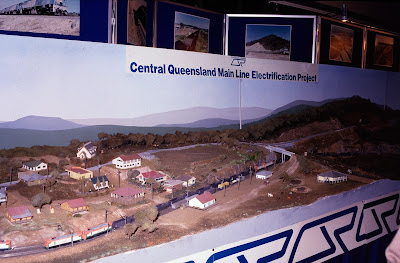 The layout would tour the state and was open to schools and the general public. 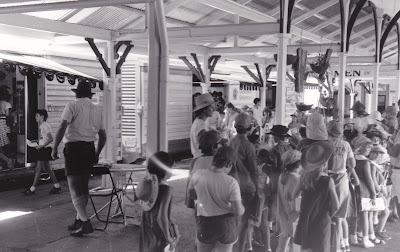 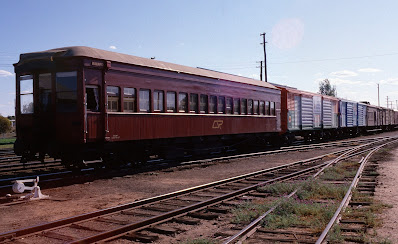 Car 453 being trailed out the back of a train with the promotional wagons behind a steel TGV van.

With the phasing out of wooden cars commencing in the mid 1980’s, three “M” class AC Dining/Griddle Cars (MDC/MDC/G) were converted for special use in 1987/88.  MSD 1460 Special Dining Car, sleep 4 and seat 16. MSS 1465 Special Sleeping Car, sleep 6 and seat 12. The carriage had a glass observation end and one of the sleeping compartments has an ensuite. MSB 1464 was a Special Boardroom car that could sleep 8 and seat 23. If the carriages were used outside A/C trains operations, a power car of sorts was required.

Model. To add this type of operations to the layout using these cars, a carriage needed to be made or modified. Following the prototype practice, I decided to modify a kit that was available of a similar carriage with same roof profile. None of the prototypes as above were available in kits. Given I had travelled in Car 453 to my home town, this was the style I was looking for.

Caintode Flats Kits are a joy to do with minimal work required to have an awesome model on the layout. Kit CFK 6 “BL” 2nd class Sydney Mail sitting carriage was purchased for the project. Sides, ends and roof were assembled as per the instructions, the underframe was added to the carriage body and secured with rubber bands. The overlapping roof section was used to make a pattern for a top and bottom plate for both ends to assist with closing in the two ends. Evergreen styrene scribed sheet and strip was used to enclose each end as needed.

By having the sub floors at each end, this allowed the coupling box screw to also fix the underframe to the body. Should I ever need to remove the floor for any reason it can be done quickly. Kadee # 158 scale head couplings mounted in a # 262 narrow snap together whisker coupling box was used for the model.

Taking a photo before painting is a great idea, it picks up the unfinished parts on the model. 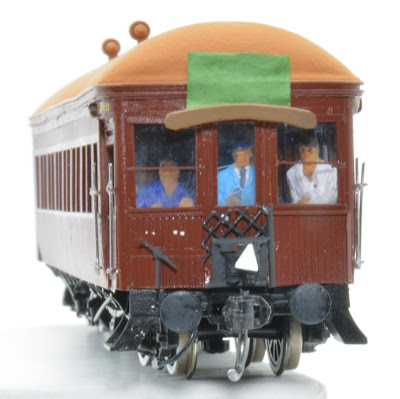 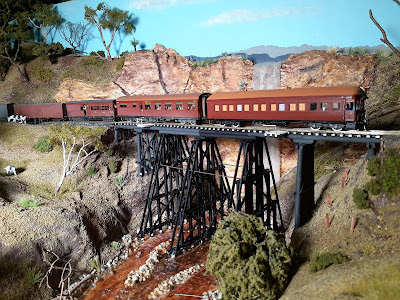 The sides and ends were airbrushed with PGC “Passenger Red” Acrylic Lacquer.

The roof was painted with Floquil T 10073 Rust.

From time to time I run ahead of myself during construction, to fix this I write notes as I think of work or detail I want to add or do. One job I recalled after fixing the window class was, I omitted to paint the window frames. The last few guards van I have made, the window frames were painted chocolate. Maybe, I should start doing this for painting process and final assembling. Bugger, getting old is not much fun????

Some inside furniture was made for the observation end of the carriage from styrene, figures were painted and added to finish off the carriage.

During my MLE days on the rail, four modellers were allocated to do the tours, one of them was a work mate from the 1970’s. He retired due to ill health during the period the tours were in operations. From time to time when he was good health, he would come along with me. Days on the road were often long, open for business 9:00 am to 9:00 pm, plus packing up and setting up, servicing the layout, looking after the general cleanness of both displays and looking after oneself, his assistance was always appreciated. The Roma Charleville trip with car 453 was one trip Don did with me, that’s him in the chair with his feet on the window in the photo looking out the rear of car 453. In February his heart condition finally caught up with him. I have honoured our 48 years of friendship by including him in the carriage sitting at the observation window with his feet up.

The model will make a welcome addition to the layout’s operations.

QR 1963 List of Classes of Coaching Rollingstock and Description.

Trust you found the information helpful for your modelling projects.

Stay safe and enjoy the hobby until next time.