When I started building the layout I always wanted a trestle bridge. Provision was make for the bridge with the establishment of the creek section across one end. This end of the layout was to be a country scene to reflect distance on the layout. An “S” bend was incorporated to take away continuous straight track. 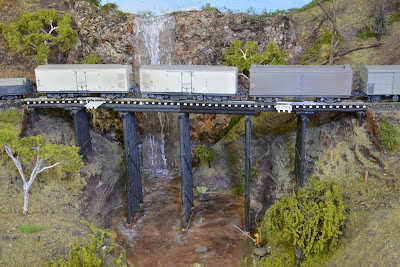 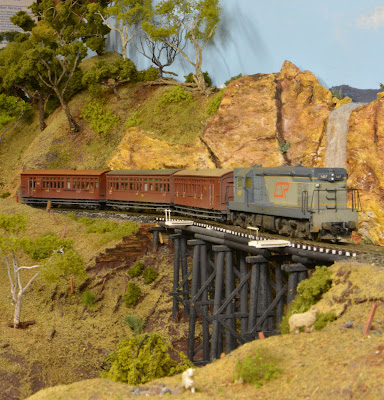 A few years back the rock face and waterfall was redone. 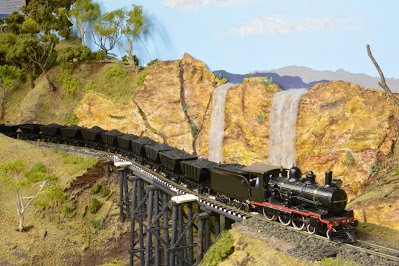 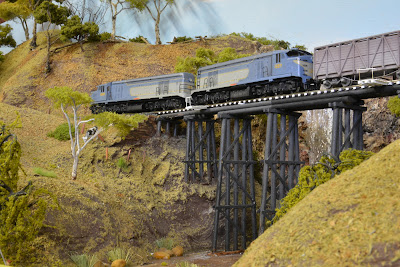 At the time, plans I had showed trestle pier arrangements for bridges up to 30’ high. Measuring the distance between the rail and the creek bed, my bridge was going to higher than that. With no plans or photos for a bridge of the correct high, I used the 30’ arrangements until such time something else came up. Over time with various visitors viewing the layout, some with more bridge knowledge than me, some refinements were made. In the back of my mind I had a feeling the bridge was not right.

A few year back in researching bridge plans for a mate, I was sent plans for a bridge that was the correct height. Bugger, my thoughts had come back to be true, my bridge was incorrect. For a time I accepted my error, as time went by it started to bug me. The original bridge was built using 5 mm dowel from Bunnings, a local hardware store. My next visit to the store I found the only dowel sizes available were 4 mm and 6 mm. I only needed to replace three or the seven piers of the bridge, I need all to be the same size. The project when back to being on hold.

In January I attended a Division one NMRA meeting, during the Show & Tell a member showed his timber bridge and explained how it was made. He used 5 mm dowel for the piers. Later I chatted with the member and enquired about his source of the 5 mm dowel. He indicated it was purchased from the craft section of a cheap shop. The next day Kerrie was sent out shopping with a sample to the cheap shops. After searching three shops, none was available. The penny dropped to check out eBay, a number of choices were available. A pack of 100 pieces 200mm long was ordered. 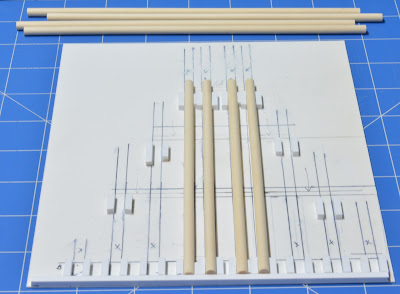 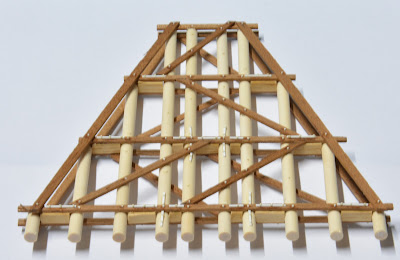 A couple of weeks later the package arrived and replacement piers were made using a styrene jig. Nut, washers and steel strapping made from styrene were added. The completed piers were airbrushed with Mirotone black etch primer. Strapping and nut were picked out with Vallejo brown. 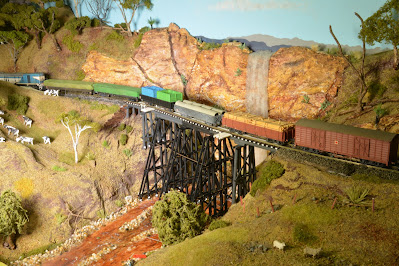 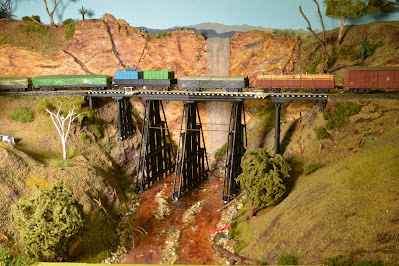 The creek bed and the old piers were removed. The morning I was go to install the new piers the penny dropped I still had an error in the bridge. Two guarders came together on top of a pier without a corbel. Modifications were made and the piers were installed. The opportunity was taken to redo the creek bed. The base was painted with brown and green artist water colours. Rocks were added in various locations and Woodlands Scenic “Realistic Water” was used for the water. Woodlands Scenic “Water Effects” was used to highlight water flowing along the creek bed. 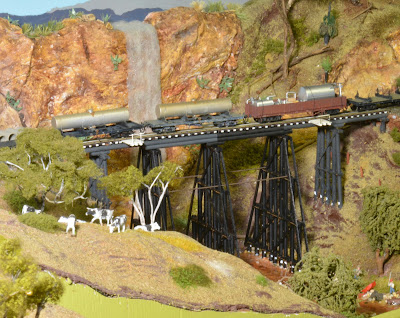 The opportunity was taken to redo some of the scenery in the area, over time I think it’s good to refresh the layout.

Trust you find the information helpful.